Naver gets some competition

The new facility, when finished, will focus on cloud and AI solutions. Kakao is one of Korea's largest Internet portals, operates its own ride-hailing platform, and online bank.

As reported by the Yonhap News Agency, the data center will be built on Hanyang University's ERICA campus in the city of Ansan, Gyeonggi Province. Kakao says it's expecting to spend around 400bn won ($337m) on the project. The data center will be built on an 18,383 sq m (200,000 sq ft) plot of land and house around 120,000 servers with a data storage capacity of six exabytes. Construction is expected to begin next year and be completed by 2023. 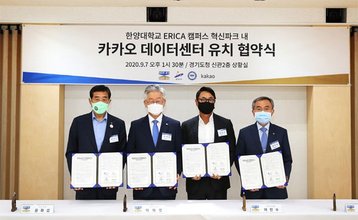 All parties signed the deal on September 7 – Kakao Corp

Korean publication Pulse News says the move by Kakao is to challenge rival Naver's hold over the Korean tech market.

The new data center will accommodate the company's Kakao I platform, an AI/cloud solution. The Ansan data center is also expected to use eco-friendly technologies such as a system that collects rainwater for re-use. However, most of the details concerning the sustainable nature of the data center have yet to be disclosed.

Minsu Yeo, co-president of Kakao, said (translated): “We aim to design the best data center in the IT field with stability, scalability, efficiency, availability, and security.

"The establishment of the data center will be a great opportunity for developing AI, big data, and cloud-related industries."

Provincial officials say the data center is expected to generate 2,700 jobs and approximately 800bn won ($672m) for the economy.