City of Ulsan's underwater space will include a data center module

A pioneering underwater city project funded by the South Korean government will include research into efficient underwater data centers.

The Korea Institute of Ocean Science and Technology (KIOST) is leading a 37.3 billion won ($30.8 million) project to build a submarine living and working space for people, off the southeast coast of South Korea near Ulsan Metropolitan City. The project will also investigate high efficiency underwater data centers, the Mayor of Ulsan said at the launch. 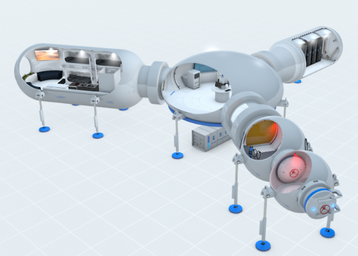 The project, backed by the Ministry of Oceans and Fisheries will include a living space 30m under the sea, where five people can live and work continuously for 30 days, said Ulsan Mayor Song Cheol-ho at a City Hall press briefing on April 13, according to a Kurdo report. The experiment “will also contribute to the expansion of data centers as it can operate an underwater data center with high energy efficiency and stability," he said.

The data center is just one part of the project, but a module containing servers is visible in the concept design image provided by KIOST.

The project has a wide brief, also including "an ocean observation forecasting system that can provide early warning of marine disasters such as earthquakes and tsunamis," as well as underwater leisure and tourism, said the mayor.

The ‘Submarine Space Creation and Utilization Technology Development Competition Project’ has 31.1 billion won in government funds providing more than 80 percent of the total project cost, and is due to last five years.

Mayor Song said the project would have great synergy with local industry, including the shipbuilding and offshore plant sectors. He also promised it would help combat climate change: ”We are confident that it will be a great driving force in leading carbon neutrality by providing storage technology.”

The project will also develop medical technologies for underwater health and safety of residents, as well as technology for underwater energy supply and communication, reports Aju Business Daily. As well as KIOST, the project includes 23 institutions and companies, including the Korea Aerospace Research Institute, and SK Telecom.

KIOST researcher Han Taek-hee said operating underwater would be like living in space: "The undersea platform is an aggregate of various advanced marine science and technology like the space station. We will do our best to successfully lead the project to the next level."

The Ministry chose Ulsan because of its hospitable tides and water temperature, and its geologically stable seabed, as well as the presence of a marine plant industry.

Interest in building underwater data centers is running high at present, with projects underway in China and the US. China's Highlander is building a commercial underwater data center designed to operate 20m down without human presence. Meanwhile, in the US, Subsea Cloud has promised data centers sunk to a much greater depth of 3,000m for the sole reason of preventing physical hacking.

The idea began with Microsoft's Project Natick, which first sank a rack of servers in US waters back in 2015, and served Azure cloud operations from the sea bed. That was followed by a two-year project off the Orkneys in Scotland.