The project is due to be completed by Q3 2025, with the ALC mooted to support Southeast Asia's economic growth, as it connects Hong Kong SAR and Singapore, with the Philippines, Brunei, and Hainan, China. 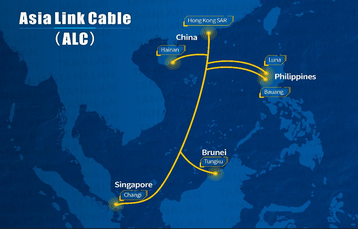 "Southeast Asia is one of the world’s fastest-growing economies, with rising digital demand from consumers and businesses, accelerated by the pandemic. Consumers and businesses are increasingly relying on services and solutions that require higher-bandwidth and lower-latency connectivity for their work, studies or entertainment," said Singtel chief executive officer, group enterprise and regional data center business, Bill Chang.

"The ALC will bring greater connectivity capacities to transform industries, unlock more opportunities for innovation, further enhancing the digital experiences of Southeast Asian consumers and supporting the growth ambitions of the region."

ALC is made up of eight fiber pairs that can transmit up to 18Tbps per fiber pair, says Singtel. Further capacity will be added, along with route diversity to existing networks, helping to bolster resiliency for international Internet traffic through the region.

Singtel is also a carrier involved in the Southeast Asia-Middle East-Western Europe 6 (SEA-ME-WE 6) submarine cable system that's set to connect a plethora of countries between Singapore and France. The SEA-ME-WE 6 cable is 19,200km long and earmarked for completion in the first quarter of 2025.