Singapore earlier this month launched one of the world’s largest inland floating solar photovoltaic (PV) solar farms. Located at Tengeh Reservoir in Tuas, this comes just over four years after the launch of a successful testbed at the same location in 2016.

Consisting of 122,000 solar panels spread across 10 solar-panel islands, the Tengeh solar farm covers 45ha, about the size of 45 football fields. It has a capacity of 60 megawatt-peak (MWp) which is fed directly into the national grid. The installation of energy storage capacity is said to be an option for the future.

The floating solar farm is designed, built, owned, and operated by Sembcorp Floating Solar Singapore in partnership with Public Utilities Board (PUB), which regulates and oversees the water supply system in Singapore. 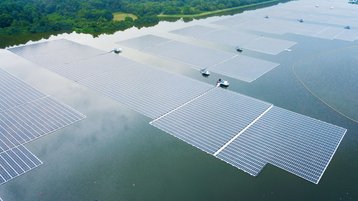 According to the PUB, gaps between solar panels were incorporated to improve the airflow and allow sufficient sunlight to reach aquatic life. Moreover, aerators maintain oxygen levels in the water to reduce the impact on biodiversity and water quality of the reservoir.

According to reports, double-glass PV modules are used for strength, and the panels themselves are tilted to optimize rainwater drainage. To ensure that water quality is not compromised, floats are high-density polyethylene (HDPE) – a certified food-grade material that is UV-resistant. They are also tethered to the reservoir bed via mooring lines to limit movement in strong winds.

Drones are used for regular operations and maintenance checks to ensure that panels operate optimally, shaving manual inspection costs by about 30 percent.

The floating solar arrays benefit from evaporative effect of water, even as it cuts evaporation itself to reduce water loss from the reservoir. Indeed, the cooler components saw the test bed perform up to 15 percent better than a conventional rooftop solar power system during the trial.

The power generated at Tengeh is sufficient to power the operations of all five local water treatment plants, according to Prime Minister Lee Hsien Loong, who officiated at the opening.

Singapore has set itself a targeted solar capacity of 2-gigawatt peak (GWp) by 2030. Similar floating solar farms are now under construction at the Bedok and Lower Seletar reservoirs, with work expected to complete by later this year.

With limits on power and land, the country is currently in the midst of a data center moratorium.