A division of Siemens has joined a Swiss group promoting the idea of building Edge data centers underground in urban tunnels. 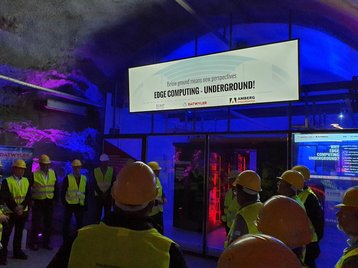 "The pilot demo data center is located in Switzerland but we can apply this concept anywhere, and this is the aim to implement it world wide," Antonia Cornaro, a business development expert at Amberg told DCD.

In late 2019, the Swiss Center of Applied Underground Technologies (SCAUT) built a prototype underground modular data center at the Hagerbach Test Gallery, a 50-year old facility for research and development of underground projects (which also includes a restaurant, rifle range, and wedding venue).

The group says that building underground can make use of "fallow" tunnels and underground rooms, apparently widely available in Switzerland, but the group also hopes to work in newly dug tunnels, said Cornaro. "Retrofitting can be an option but digging new facilities/caverns is an even better approach as they can be custom fitted to the operator's needs."

Underground spaces are protected against the forces of nature and have a stable climate allowing them to operate with high efficiency. They also save on scarce and expensive surface land. Edge facilities will communicate with end devices over 5G wireless, which doesn't easily carry underground to communicate, but they can be linked to transmitters at ground level, pointed out Cornaro: "Wireless communications including 5G can be installed without a problem.

“In the future, the vast majority of people will live in urban areas," said Felix Amberg, Amberg President. "The use of the third dimension not only upwards, but also underground will be an essential part of the urban development of smart cities."

"Even if we live in a dynamic world full of uncertainties, one thing is clear," said Johannes Müller, Datwyler CEO. "The data volumes resulting from new technologies such as IoT will to a large extent have to be processed decentrally and partly underground."