Outages could last until Saturday, with most telco services hit

The Shetland Islands has been hit by a major outage which has affected landline, Internet, and mobile services.

It's been caused by a breakage in a submarine cable, with the Shetlands connected by a cable that runs from the Faroe Islands to Aberdeenshire, mainland Scotland. The cause of the break hasn't been disclosed. 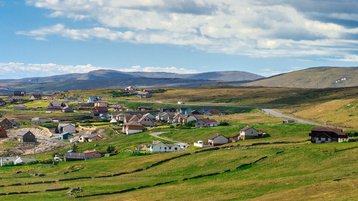 BT blamed the outages on breakages to a 'third-party cable that connects the Shetland', which is 100 miles off the North coast of Scotland.

The cable that has been affected is the SHEFA-2 submarine cable which has been impacted between Shetlands and Orkney, an archipelago in the Northern Isles of Scotland. The cable is owned by Faroese Telecom subsidiary Shefa, which said: "Telecom services in Shetland are affected due to a cable fault in the SHEFA-2 submarine cable between Shetland and Orkney. Technicians are working to restore services to the extent possible."

Delays could last as long as Saturday, says Sky News, with the outages happening this morning, with engineers working on fixing the issues since 5 am this morning. BT has reportedly texted customers that it was attempting to fix the major outage.

The police have declared the outages as a major incident, while the MP for Orkney and Shetland Alistair Carmichael said that the damage has caused a "catastrophic impact."

"Engineers are working to divert services via other routes as soon as possible and we'll provide further updates. Our external subsea provider is also looking to restore their link quickly," said BT Group in a statement.

"Engineers are working to divert services via other routes as soon as possible and we'll provide further updates. Our external subsea provider is also looking to restore their link quickly.

"Anyone who needs to call 999 should try their landline or their mobile, even if they don't have signal from their own mobile provider. We're sorry for any inconvenience."

It's understood that Shetland Broadband services have been unaffected, but shops in the Shetlands have been unable to process card payments, while ATM cash machines are not working, according to local media reports.

The Shetland Islands has a population of close to 23,000 and is heavily reliant on its fishing industry.

Shefa deployed the SHEFA-2 cable in 2007. It also operates the CANTAT-3 and HRONN cables.