Seagate is being sued over faulty hard drives

Storage specialist Seagate has been sued in a class action that accuses the company of breach of consumer protection, false advertising and unjust enrichment.

The complaint alleges that the 3TB Seagate Desktop HDD (ST3000DM001) launched in 2011 has been failing at an extremely high rate, and didn’t deliver on marketing promises.

The case relies on personal experiences of plaintiffs and the findings of Backblaze – a cloud storage company that collects hard drive metrics to establish reliability and level of real-world performance.

Back with a vengeance 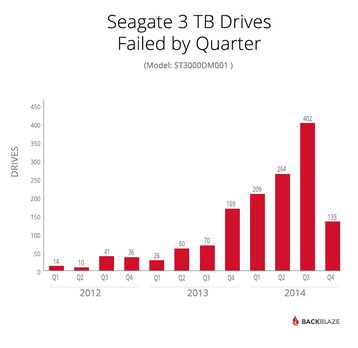 In 2014, Backblaze publicized its decision to replace all Seagate ST3000DM001 units after discovering much higher than usual failure rates. The company said it deployed 4,190 drives of this make in 2012, in the wake of the ‘Thailand Drive Crisis’. By March 2015, a whopping 32 percent suffered a critical failure while part of a storage server.

The same figure for Western Digital and HGST drives stood around 4 percent.

Backblaze suggested that the manufacturing process for 3TB Seagate Desktop drives could have been impacted by the flooding in Thailand, but the exact reasons for high frequency of failures were never established.

ST3000DM001 was the industry’s first drive to squeeze 1TB onto a single disk platter, and promised annualized failure rates of less than 1 percent.

The class action lawsuit, filed in the US District Court for the Northern District of California, describes scenarios where customers had their devices fail, and when they got replacements, those replacements failed as well.

The lawyers allege that Seagate didn’t deliver on its promises, and customers unexpectedly lost massive amounts of data as a result.

“These hard drives failed to deliver on Seagate’s promises, and replacements from Seagate were just as defective, amounting to loss of data and wasted money for thousands of purchasers – something we believe to be direct violation of federal consumer-rights laws.”

We should note that Backblaze was previously criticized for using consumer-grade drives for data center operations. In the midst of a hardware shortage, the company intentionally chose cheaper drives to meet its business objectives, so its findings might be invalidated by the judge.