Regulations would not allow SDSC to install more diesel backup

The new batteries were provided by Urban Electric Power (UEP) when the supercomputer outgrew the capacity of its diesel backup generator, which could not be expanded because of California's environmental regulations. This left part of the supercomputer center relying on street power with no backup, so it has installed zinc manganese-dioxide cells from UEP. These use the same chemistry as household AA alkaline batteries, altered to make them rechargeable for 10 years or more. 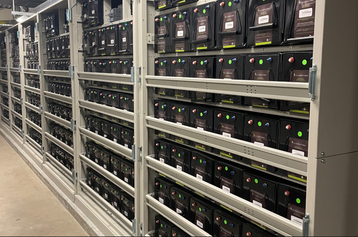 AA to the rescue

The SDSC is a leader in high performance computing (HPC) and AI research, using equipment such as Intel Habana chips in its Voyager system. It has petabytes of storage, and hosts projects for researchers on the local campus as well as other collaborators across the nation. However, its power system has been stretched of late.

“Our computing capacity outgrew the size of our generator and we couldn’t expand it further,” said Christine Kirkpatrick, division director of SDSC’s Research Data Services and secretary general of the International Science Council’s Committee on Data (CODATA). “A big portion of our racks have only traditional lead-acid UPS coverage that in an outage would last 27 minutes. Some portion of our data center is only on street power, and goes out immediately when the grid fails.

Describing the UEP system as a "game-changer", she said: We can now offer hours instead of minutes of power to our UPS customers, and with our next installation phase, expand battery backup to those on street power.”

The new batteries will allow SDSC to recycle 20,000 lb of toxic lead-acid batteries, and replace them with a more environmentally friendly alternative, while at the same time doubling the available backup power

The new installation contains 5,200 individual alkaline cells, storing one megawatt-hour worth of energy. SDSC has already ordered an additional 5,200 cells that are on the way for Phase 2, which is due to be commissioned this summer.

UEP's adaptation of alkaline battery chemistry is patented, and SDSC is its first enterprise application, said Kirkpatrick: "Our partnership with Urban Electric Power has made our computing footprint greener.” 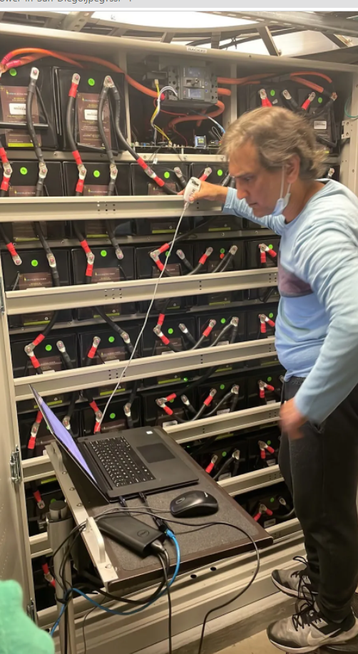 SDSC chose the AA-battery variant because it is a lot cheaper: it cost less than half a system based on comparable lithium-ion batteries. It also does not need fire-suppression systems which would be required for potentially flammable lithium systems, which can suffer from thermal runaway. The UEP systems are UL certified as fire-safe.

Rechargeable alkaline batteries are already widely available, and research at Ford, Union Carbide, and elsewhere has looked at updating zinc manganese-dioxide chemistry to make rechargeable batteries. UEP says its products 10 year lifetime is "50 times longer than when Ford Motors first tried recharging alkalines" (which is to be expected perhaps, since Ford's experiments date back to the 1980s).

The UEP technology was invented by a team at the City College of New York, led by Professor Sanjoy Banerjee who is now the company’s CEO. UEP makes the batteries in a factory at Pearl River, New York.

The UEP system dopes the zinc manganese-dioxide alkaline battery with copper, bismuth, and other ingredients to make it rechargeable. It also uses a proprietary separator between the cathodes, which preserves the system during repeated recharging.