Council officials for the City of Temple, Texas, have approved a zoning request to allow Rowan Green Data to develop a data center.

First announced in October 2021, the Joint Venture between Quinbrook Infrastructure Partners and Birch Infrastructure plan to construct 135,000 square feet (12,500 sqm) of data center buildings on the site in Bell County.

The Temple council last week voted in favor of rezoning 162-acre tract from agriculture to light industrial, alongside an economic development agreement around waterworks development. A second reading is due later this month. 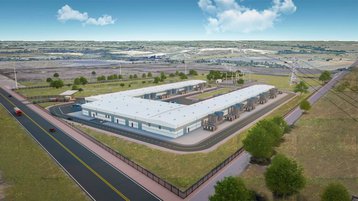 The company is currently focusing on developing 33 acres of land in Synergy Park at 2810 Bob White Road, but has the right to acquire around 142 additional acres of land for further development phases.

The first phase of the project is reportedly expected to offer 200MW of capacity, eventually expanding to 500MW.

Under the economic agreement with the City, Green Data is to invest at least $225 million in the project, create at least 20 jobs, and begin construction within 12 months.

Green Data will develop and construct water and wastewater lines running to the facility – there are also discussions about a proposed well – that will be operated by the city. Temple City will reimburse the company more than $4.8 million for the water and wastewater development work.

During the meeting, City officials said the company is working to file for tax breaks in the near future.

Meta, formerly known as Facebook, is also building a large-scale data center in the City of Temple. The new facility, located on 393 acres off NW H K Dodgen Loop and Industrial Blvd., will total approximately 900,000 square feet (83,600 sqm) when completed. Construction will begin in Spring 2022.