French load bank specialist Rentaload has developed a new rack-mounted appliance capable of maintaining a Delta T between 10K and 30K and generating horoizontal airflow, enabling it to accurately reproduce the heat output of an average server.

Delta T is the temperature differential bewteen entering cold air and exiting warm air, and is the defining characteristic of load banks designed for data centers.

The 7kW appliance can be connected to a PC for monitoring and reporting. It is available immediately across Europe.

Pretending to be a server 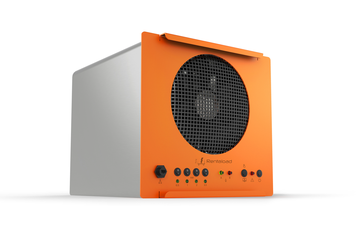 Load banks are specialized devices used in commissioning of data centers to test cooling and power distribution equipment before the servers arrive. They are essentially large electric furnaces, mimicking the power consumption and heat output of IT hardware.

They are also used in other industries, to test all manner of power generation kit.

Another interesting aspect of load banks is they are typically rented, not bought – since it doesn’t make sense to acquire equipment that you’re only going to use once.

The latest device from Rentaload goes the extra mile to reproduce the properties of servers – it features horizontal airflow (instead of conical) and a programmable, fairly low Delta T – the company says some of the competing devices rely on temperatures that are too high for servers, thus skewing the results.

The load resistances can be adjusted from 0.5 to 7 kW, and the load bank features an integrated ATS switch for redundancy testing.