QuTech, Eurofiber, and Juniper Networks to open a quantum networking testbed in the Netherlands

The testbed will work on quantum cryptography and explore future possibilities for quantum networking. In particular, it will focus on a new form of quantum key distribution (QKD), which will make uncrackable communications available more widely. 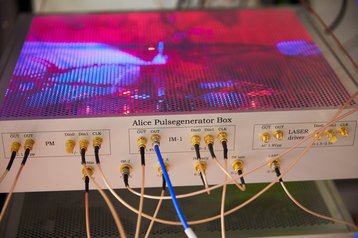 Why we need a quantum Internet

While true quantum Internet protocols are under development, quantum effects such as entanglement are already being used to provide secure communications. Quantum key distribution (QKD) shares encryption keys using quantum effects which make undetected wiretapping impossible. However, these systems are very hard to scale because they operate between specific points and cannot be accessed by general users.

The testbed work on a new protocol that extends QKD beyond point-to-point systems. MDI-QKD (measurement device-independent QKD), demonstrated in July 2021 by QuTech — a collaboration between the TU Delft and TNO — allows multiple users to access a QKD network, going beyond the limitations of point-to-point systems.

“Unfortunately, current commercially available QKD systems are difficult to scale in a network,” said Joshua Slater, team lead of the MDI-QKD project in 2021. “To solve all these problems, we’ve built a measurement-device independent (MDI) QKD system, in which multiple users can be connected via a central node that operates like a typical telephone switchboard operator. Importantly, the central node does not need to be trusted. The entire system is designed such that hacking attacks against the central node cannot break the security of the protocol.”

In the testbed, QuTech is working with infrastructure provider Eurofiber, and network firm Juniper Networks. The team will run a proof-of-concept MDI-QKD system over a commercial optical fiber network to demonstrate it can be more broadly applied. It will be accessible at several Eurofiber locations, through Juniper's routing, switching, and security products.

The aim is to make future MDI-QKD systems easier to deploy, spotting new applications for the technology, and ironing out integration challenges. Beyond that, multi-point quantum cryptography will produce experience and results that are useful in the development of a quantum Internet.

MDI-QKD will be a building block for the Netherlands' National Quantum Network, developed and deployed by the Quantum Delta foundation in one of its Catalyst programs. This program aims to lay the foundation for the next generation of digital infrastructure in the Netherlands.

"This is an important step for us because one of the goals of QuTech is to build and grow the quantum ecosystem. This is a final proof-of-concept before QuTech launches a spin-out to commercialize QKD technology further," said Slater.

Marc Hulzebos, innovation manager Eurofiber, said: “For Eurofiber this is a great opportunity to be at the forefront of developments in quantum network technology. We are excited to participate in the project and learn about the benefits of quantum security and quantum connectivity for our data infrastructures, including datacenters. It is our aim to provide the benefits of quantum security and connectivity to our customers as soon as they become available.”

The testbed will join a global push on developing quantum networks, commented Lawrence Gasman of Inside Quantum Technology, in an interview with DCD: "There are lots of testbeds and in several different countries, mostly government-funded. Most of them are actually testbeds for QKD. There's a long way to go for quantum networking."

The project is co-funded by TKI (Topconsortium voor Kennis en Innovatie) High Tech Systems and Materials, as part of a larger Dutch ecosystem of quantum research and development.