Company makes first expansion out of California with $1bn investment

Prime Data Centers is planning to build a new data center campus in Elk Grove outside of Chicago, Illinois. 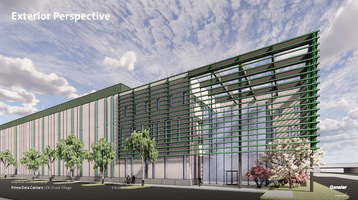 “We are excited about the opportunity to enter the Midwest market in a big way. These types of facilities are in high demand from some of the world’s largest companies,” said Prime’s EVP of sales and business development, Jeff Barber. “Partnering with Elk Grove Village to meet the demand for data center capacity is incredibly strategic to both Prime and the greater Chicago market in general.”

The Village said it has been “proactive in pursuing the development, made possible through a complex assemblage of parcels as part of an overall strategy to attract investment and revitalize the Busse Road Corridor.”

“We are very pleased to be able to facilitate $1 billion in investment to the Village,” said Elk Grove Village Mayor Craig Johnson. “The fact that Prime Data Centers is making this kind of investment in our community confirms for us that we’re delivering on our mission to become a worldwide destination for high-tech companies and manufacturers. We’ll continue to work with all companies large and small that want to select Elk Grove Village as a place where they can thrive.”

The Daily Herald reports that the municipality has voted to eventually sell as many as six parcels to the firm for an estimated $30 million. Elk Grove owns two parcels, and is pursuing the acquisition of the other four.

Under the proposed redevelopment plan, Prime will pay Elk Grove $21.3 million once the village has acquired two more properties; an office building complex at 1500 E. Higgins Road and retail strip building at 1700 Oakton St. Officials say they've entered into agreements with the property owners, with a closing planned on or before December 1.

The village already has the former Elk Grove Hotel site at 1600 Oakton St. and other office buildings at 1550 E. Higgins Road.

A potential phase two would include a construction materials company site to the north at 1520 Midway Court and Illinois Department of Transportation right of way. Prime would pay Elk Grove an estimated $8.7 million for those properties, if the village can acquire them first, according to the redevelopment agreement.