The new product line follows the Cleveland-based company’s introduction of its ‘Discover, Monitor, Support, Optimize’ (DMSO) mantra, as it takes on the task of automating all systems management, integrating everything from the consultancy stage to physical implementation. 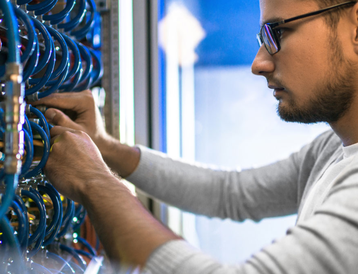 The hardware listing component is called ParkView Discovery, and covers all OEM equipment. It features IT asset discovery and dependency mapping - covering physical, virtual and cloud server coverage, as well as desktops, peripherals and edge devices.

To the issue of network pathway troubleshooting, the company’s answer is ParkView Network Analytics. The visualization tool comes with OS and application deployment by Park Place engineers as well as VPN performance monitoring.

Lastly, ParkView OS Monitoring checks on Linux, Windows and VM systems at the software level. Paul Alexander, head of technical services at The Open University’s STEM faculty, said that “the industry as a whole is likely to turn to Park Place’s coined DMSO approach, as “the industry needed to find a new direction” for equipment management. DMSO is something which is a positive for the industry. Park Place is able to lead on that because they've defined it.”.

He added: “It’s very clear a lot of people who run data centers don't know what equipment they have. So, the first problem that you need to solve on the roadmap is discovery, and that's key as part of DMSO. Once you’ve discovered it, you need monitoring. And if these things were integrated well, like through ParkView, that's a winning solution. I think then the natural progression from that is to support. Optimization totally goes hand-in-hand from there, and it covers a multitude of different platforms.

The automation of data center operations has been a conversation topic for a long time, and has seen the introduction of many a service (some more successful than others), including infrastructure configuration and data center infrastructure management (DCIM).

Park Place has doubled down on the hardware maintenance automation space, and to this end it has been on an acquisition frenzy. It has snapped up 14 companies and business units since 2006 - the most recent of which include third-party maintenance firm Custom Hardware Engineering & Consulting; data center service provider IntelliNet’s National Operations Center (NOC) and network analytics company Entuity.

In recent months it has also refreshed its management team, with a new CFO, COO, a new executive VP and its first CRO, three out of four of whom it cherry-picked from Dell EMC’s executive team.

And while data center maintenance hasn’t always been the most prolific of conversation starters, it became a larger preoccupation amid the pandemic. As operators sought ways of curtailing the spread of the virus, they have cut down on site visits.

In March, Digital Realty evacuated its New York data center and had all common areas disinfected after a visitor tested positive for coronavirus, and Facebook rushed three employees from one of its construction sites in Ireland to a testing site when they displayed symptoms.