The particulates know what you did last summer, and they’re coming for you

Technical cleaning is unlikely to be at the top of any data center operator’s priority list. If it’s there at all, it’s probably only grudgingly so.

That’s not to say that, over time, the industry has learnt nothing: providers realized early on that contaminants in the air would damage IT hardware, that static-producing carpets had no place in a server room, and cables belonged in subfloors. They also realized that restricting access to data centers was a good idea for cleanliness - as well as security.

But even now, being meticulous is not a given: data center operators wanting to skimp on costs have been known to reduce the frequency of their cleans to a bare minimum.

And while most people’s attitudes have matured, said Mike Meyer, director of ABM Solutions’ data center maintenance business, contaminants are still making their way into data centers. Best practice can remedy this, he told DCD, but some operators still tend to cut a few corners here and there. 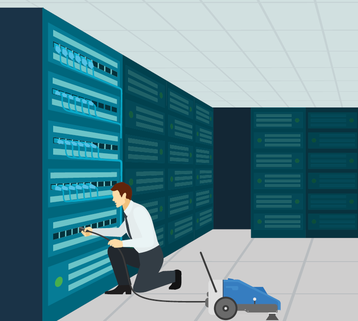 So what contaminants affect data centers? Particulates as small as half a micron (a millionth of a meter, or 1/400,000 of an inch), can damage servers, storage and networking equipment by causing them to overheat and short circuit.

These particulates can come from anywhere, from a visitor’s shoe soles to fragments eroded from the inside of air conditioning ducts or data hall walls, or dust from packaged items unwrapped inside the data center.

Tim Gentle, the general manager of technical cleaning company Australian IT Services, also regularly finds errant insects and lost critters that roam - or have ceased to roam - under the raised floors when on a job.

Zinc whiskers are fluff-like accumulations of micron-sized elemental zinc that grow on electroplated surfaces. They develop spontaneously when zinc atoms separate from the steel, pushing the coating away from the surface at a rate of 250 microns a year. Zinc is a good conductor, so when whiskers reach 500 microns, they become a threat to microcircuits, causing short circuits, voltage variances and signal disturbances.

Most commonly, they grow under older raised floors, whose underside is made of steel galvanized or electroplated with zinc to avoid rusting or oxidation.

Many data centers have removed their zinc coated raised floors, but zinc whiskers can still enter through other means, such as zinc coated cable baskets, nuts, bolts, steel conduits and metal railings.

ABM Solutions told us of 30 to 40 zinc whisker cleaning projects it had done in the last eight years. Recently, one customer reported 142 power failures caused by the metal particulates.

As the industry has learnt about whiskers and other issues, cleanliness has become part of the design process. Modular data centers, for example, are typically well sealed to keep contaminants out.

However, other considerations like operating costs and energy efficiency can worsen things rather than improve them. For instance, free cooling saves energy by using outside air to remove heat, but it means the data center is more prone to ingest particulates from the outside world. Examples of this include: sea salt from marine air, dust from leaves in the autumn, industrial pollutants hanging in the air, et cetera. 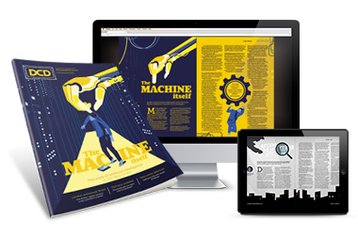 From the magazine: For more info, or to subscribe go here – Mar Perez

One source of contamination took ABM Solutions’ staff by surprise. Technicians at a Dutch facility had been tackling air quality problems for some time, but could not identify the cause - until they realized what their neighbors were introducing into the air.

“It was actually human remains,” said Meyer. “There was a crematorium across the road. [The operators] thought they had the best filtration in the world, but their design allowed for fresh air, and what they were bringing in wasn’t fresh air, it was from the crematorium.”

Something similar, albeit less morbid, happened to Microsoft at its data center in upstate New York, according to Meyer: “They had all the filtration they could possibly think of, but then someone had a fire in a field and [Microsoft] had smoke coming into their data center. It’s not your typical contamination, but it is contamination and a result of fresh air cooling. Fortunately enough, they just powered off their data center because they are who they are and they’ve got resilience built in.”

The process of cleaning a data center involves air quality testing, decontaminating access floors and subfloors (not to mention ceilings and walls), micro-vacuuming and anti-statically wiping components, cables and the internals of equipment before they are installed in a facility.

But all this work is pointless unless airflow is taken into account, Meyer told us, because changes can disturb dust which has settled and been forgotten: “You have all this dust settled in one corner of your data center, and you don’t clean the subfloors, so it’s spick and span on the surface, but then you go and look under the floor panel in the corner, and you’ve changed a year of airflow dynamics underneath that floor. It’s used to following a path and all it does is redistributes all that settled dirt. It’s like the erosion of a river: with more water coming down it just erodes the sides of the bank, and that’s exactly what happens with airflow.”

For Gentle, data center cleaning is procedural. It takes specialized equipment, but also specialized knowledge, like how to clean a CRAC unit without bringing any water into the room, or how to lift a tile properly, how to clean DRUPS and UPS routes, and what security concerns to consider.

And even with the best of intentions, cleaning can sometimes cause more harm than just letting things be - by disrupting airflows, wetting technical rooms, or tarnishing the air quality with polish and vinyl when buffing the floor in an uncontrolled environment.

Thus, it’s a mistake to call in generalist contractors for a clean before a facility is handed over, says Meyer: “They don’t appreciate the difference in requirements.

“Construction companies are falling short by using generalist cleaners and thinking they’re cleaning to a high standard, but if you start putting a particulate count machine in there, you start measuring air quality at .5 micron.” 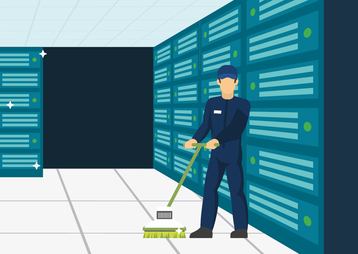 Despite this, it is hard to tell whether dirt is a major cause of downtime, he says, because the industry keeps failures quiet.

Manufacturers, though, have adapted their guidelines to stipulate how to clean their hardware and to what standard and, for Meyer, this is proof that contaminants and downtime are directly correlated: “It’s quite a secretive industry, so even if there’s been a failure due to lack of maintenance, they very rarely publicize the cause. You’ll hear a server went down and some connectivity was lost on their mobile provider or something like that, and it’ll be down to a hardware error or a hardware failure.

“The maintenance company is a long way down the chain, and the information goes back to the hardware vendors and original equipment manufacturers (OEMs) - and now the OEMs have written their specifications down into their site. So as far as being related to specific failures, we don’t have any exact information, but we know that it happens.”

Thankfully, it’s not all doom, gloom and corpses clogging up servers. The data center industry is booming - and so is technical cleaning.

For Gentle, increased competition means that operators care about keeping their facilities pristine: “particularly in the colocation area, they want data centers to sparkle because they’re all looking for market share and a lot of presentation is about looking at how you care for your client’s precious stuff,” he said.

In Meyer’s experience, it is still a work in progress. Some medium sized companies are reluctant to pay the cost of cleaning their data centers properly, but most operators do understand the need for regular cleaning. What really stands in the way of perfection is both a lack of awareness and an absence of legally enforced standards.

Manufacturers and customers typically rely on the ISO Standard 14644-1 Class 8 for cleanroom and associated controlled environments - an air cleanliness classification which rates a facility according to how many particles of specific sizes exist per cubic meter. In this case, particulate matter measuring .5 microns must not exceed 3,520,000 per cubic meter.

“So what we’re starting to do is educate the market through the data center alliance as well as briefings and networking events and so forth, and I think we’ve had quite a good uptake. We’ve also been working with end users and tenants, especially in the colo industry, to actually start asking for these services in their SLAs,” Meyer said.

“We find that a lot of it is client driven initially. The industry is forcing colo operators that didn’t want to clean. They are quite apprehensive initially, they feel that it’s an expensive, unnecessary service - but once we’re actually cleaning we see our services upscaling and they don’t tend to doubt us anymore.”

Companies like ABM Solutions and Australian IT Services hope that through extensive staff training programs and “educating the market,” consistent cleanliness in the data center is possible, and that dirty downtime will become a thing of the past.