More resilient servers offered in OVHcloud data centers in the US, Europe and Canada

French cloud provider OVHcloud has announced new options for bare metal customers in all its data centers, while it continues efforts to restore services destroyed by fire in its SBG2 data center in Strasbourg in March.

The new Scale and High Grade ranges of bare metal servers are aimed at large organizations and will provide high capacity bandwidth and high availability for critical workloads. They will be available in Europe, the US and Canada. 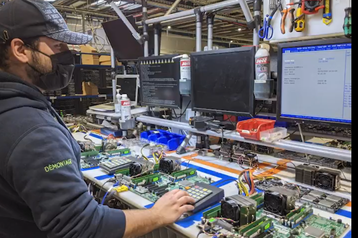 The servers use AMD Epyc and Intel Xeon Gold CPUs, and include OVHcloud's link aggregation technology, which combine network interfaces for each server, to boost its availability and keep it isolated and safe from external threats. The new options include unlimited traffic and a 99.99 percent anti-DDoS protection service level agreement (SLA).

Meanwhile, work continues to restore servers and, where possible, data belonging to customers hit by the disastrous Strasbourg fire in March, which destroyed the whole of the SBG2 data center and damaged the SBG1 facility to an extent where OVHcloud abandoned efforts to reopen it for now.

Servers are being replaced and relocated in SBG3 and SBG4. The latest update from OVHcloud founder Octave Klaba reveals that 92 percent of bare metal servers are now up, along with 84 percent of virtual private servers (VPS) and 86 percent of public cloud infrastructure (pCI)

"We are close to finishing all the stuff on the Public Cloud," Klaba tweeted to customers on Sunday. "If you see the things that don’t work for you, pls DM me."

Earlier in the weekend, Klaba detailed the options for customers. For pCC/HPC customers, "The restarting / the migrations are in progress with the cust, because some custs want to consolidate their infra (thanks to the new HW). If the cust doesn’t answer us, we restart the infra « as it was » with new HW."

OpenStack public cloud customers should have an email explaining the procedure: "On Public Cloud, we are NOT allowed to restart the service. The cust has to do that, if needed."

For virtual private servers: "We almost have restarted VPS from backup. We are working on 6%. Mon/Tue. Then we will restart all remains (empty) VPS. It will take time since we need to add the HW in SBG3. Faster way is, the cust start a new VPS in GRA (but IP will change)."

Bare metal servers that were in SBG have been shifted to SBG4, but the ones moving into SBG3 are "a nightmare," said Klaba: "Next wk only, first server will be UP. All servers are cleaned and tested, but it takes time to reassemble the racks .. a huge Tetris."

For bare metal servers which were destroyed in SBG2 and SBG1, replacements are coming: "All destroyed servers will be (re)delivered. An email will be sent: if the cust wants us to do something else, example in the case he’s already ordered another server and he just wants to migrate IP / six months voucher to the new server.

For anyone not covered, or confused by the instructions, Klaba asks: "Please contact us."