OpenStack is more popular than ever, but organizational challenges remain

The OpenStack Foundation reported on the progress of the open source project and outlined five areas where it could improve, on the first day of the bi-annual OpenStack Summit – this time, taking place in Boston.

The OpenStack community has plenty of reasons to be optimistic: according to the latest user survey, there has been a 44 percent growth in deployments year-on-year, and 66 percent of deployments are running in production, as opposed to test or proof-of-concept stages.

But as OpenStack matures, it faces new challenges around communication and collaboration – challenges its leadership is determined to tackle. 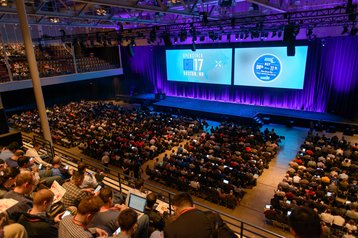 “We are seven years into this project and we are seeing accelerated growth and accelerated adoption,” Jonathan Bryce, executive director of the OpenStack Foundation, said during his keynote.

“And that makes sense when you think about how technology, especially open technology, gets developed. There’s a period when communities are formed – and we have a big community that formed very quickly – and then they start to build a technology, and then it crosses the chasm to where it can be adopted used for a massive amount of use cases.

“And that’s where we are now – our technology has matured, it’s been put into production, and we are seeing a huge user spike.”

That doesn’t mean the open cloud platform is perfect - at a recent meeting of OpenStack leadership that included more than 40 participants, the organization identified five aspects of the project that could be improved. These include:

Clearly communicating what is OpenStack

The OpenStack Foundation has struggled to establish a strong identity due to the platform’s modular nature and a high number of projects under management. The ongoing redesign of organization charts and project maps should introduce some clarity.

“We used to have ops sessions and dev sessions on separate days at the Design Summit, and with everything that was going on, we ended up only attending one side or the other. With this new format, everyone comes to the same table to discuss the same topics,” Thierry Carrez, VP of Engineering at OpenStack, explained.

“Another concern that we have identified is this view that OpenStack is an ‘all or nothing’ monolith, that you have to install all the OpenStack projects, or that you can’t really plug any other technology into an OpenStack deployment,” Carrez said.

“This is weird – because OpenStack was always, well, the open stack – we have integrated a lot of different technologies that are not reproduced within the OpenStack community.”

“OpenStack is building blocks for open infrastructure,” added Lauren Sell, organization’s VP of Marketing and Community Services. “And you can use those together, you can use them stand-alone, or you can combine them with other technologies.”

These include organizations like Cloud Foundry Foundation, Cloud Native Computing Foundation, OpenDaylight Project and Open Platform for NFV. The summit in Boston is the first to hold an Open Source Day – where these organizations will run their own sessions.

“It’s important that we are not just inviting people into our community, we have to go into these other important communities, work upstream and collaborate,” Sell said. “One great example is the OpenStack SIG in the Kubernetes community, which is generating a lot of interest.”

According to Alan Clark, chairman of the board at the OpenStack Foundation and director of industry initiatives at Suse, open source projects driven by strong, charismatic leaders are vulnerable since they could fall apart if such leadership is removed.

In order to guarantee its future, OpenStack needs to train more community leaders, and initiate them into the secrets of open source.