The OpenStack Foundation has released the first version of StarlingX – a software platform for edge computing and IoT.

StarlingX can be used for node configuration in remote edge environments, host and service management, and software updates. It can also alarm users about any faults with the hosts or the network.

The foundation says the platform is optimized for low latency and high performance applications, and is primarily aimed at use cases in carrier networking and industrial IT.

“When it comes to edge, it is crucial to be able to blend together and manage all the virtual machine and container-based workloads and underlying bare metal environment,” commented Jonathan Bryce, executive director of the OpenStack Foundation. “This is exactly what you get with StarlingX.” 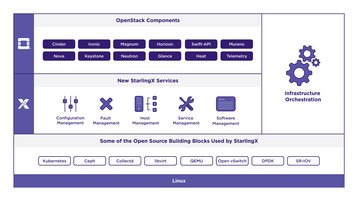 It consists of the integration engine and nearly 50 software modules, or ‘projects’, designed to do different things: for example Ironic for bare metal servers, Nova for virtual machines, Cinder or Swift for storage and Neutron for networking.

Earlier this year, the OpenStack Foundation broke with tradition and launched two projects that are completely independent of the OpenStack platform - Kata Containers for virtualization and Zuul for continuous integration and continuous delivery (CI/CD) of code at scale.

StarlingX is the third top-level project to be hosted at the foundation alongside OpenStack — with the original code base contributed by Wind River, a company that has been making software for embedded systems for nearly 40 years.

StarlingX is a software platform that can be used to manage large networks of relatively small hardware deployments, based on key technologies Wind River developed for its Titanium Cloud product.

The open source alternative can handle everything from initial hardware configuration down to application lifecycle management. It features auto-discovery, inventory management services, automatic host recovery, and offers a variety of redundancy models. The platform supports custom alarms and logs, as well as live migration of workloads.

StarlingX is controlled through RESTful APIs, using either command-line or its own GUI called Horizon. It has been integrated with a number of popular open source projects including OpenStack, Ceph and Kubernetes.

Today marks the first release of #StarlingX! Thank you to the 84 contributors, including developers who landed 1,300+ commits. Check out the open source project’s features, use cases and view the code: https://t.co/ddcIxSbNhB

“We have run a full validation on StarlingX over the past six months,” said Dr. Dan Chen, senior director of Edge Computing at the Intelligent Network Center, China Unicom. “StarlingX improved efficiency on high-availability in both VMs and at the controller level. It also optimized the required number of nodes to support edge deployment scenarios.”

“It is one of the top strategies of China Unicom to build an ‘open’ edge platform. As an ‘Open Infra’ technology for edge computing, StarlingX will play an essential role in China Unicom’s edge strategy.”

Wind River was owned by Intel when it decided to open source the project, but has since changed hands – in April, Intel announced it would sell the subsidiary to asset manager TPG for an undisclosed amount.