But only if Facebook builds all six data halls, and doesn’t make any drastic changes

An economic analysis looking at the impact of Facebook’s data center in Los Lunas states that New Mexico will earn roughly $65 million in gross-receipts tax revenue from the project over the next 10 years.

A previous report concluded that the $250m data center, and its potential five additions, could bring $28m to Los Lunas, but more recent analysis extrapolated on that data and looked at the state as a whole. 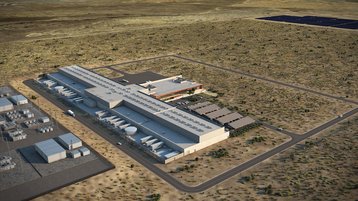 “The Facebook data center project not only brings jobs and investment to New Mexico, construction activity on the project will generate significant revenues for our state and local governments,” Economic Development Secretary Matt Geisel told The Albuquerque Journal.

The $65m figure takes into account the $10 million Facebook will get from state Local Economic Development Act funding.

Facebook, which chose New Mexico over Utah after trying to get the best offer from each state, also gets a gross-receipts tax reimbursement of up to $1.6 million annually and $30 billion in industrial revenue bonds. The bonds, which act as a property tax break, must be repaid.

The data center is expected to provide 30 to 50 permanent data center jobs, as well as hundreds of temporary construction jobs.

To support the facility, the Public Service Company of New Mexico is building a high-voltage electrical line as well as three solar farms at a cost of $45 million.