A new efficiency metric, Infrastructure Usage Efficiency (IUE) has been announced by a Chinese group, TGGC, which spun off from data center industry group The Green Grid.

IUE, which was launched at DCD>Shanghai in June, is intended to help data center operators get a better grip on their efficiency and so reduce their costs and environmental impact. It goes beyond the existing metric PUE (power usage effectiveness), to include cooling and use of space.

The new metric was originally developed within The Green Grid, a long established data center industry group, but was announced through a new Chinese body, The Green Gauge China (TGGC), set up after The Green Grid became part of a US-focused global lobby group, ITI, in April.

"It is my hope and the hope of TGGC that IUE will be adopted by the industry inside and outside China," said David Wang, infrastructure integration architect at Alibaba, who presented IUE to the Shanghai event, in an email to DCD.

TGGC's White Paper about IUE presents it as the latest in a series of standards, which The Green Grid continued with Carbon Usage Effectiveness (CUE), Water Usage Effectiveness (WUE) and Space Usage Effectiveness (SpUE). "TGGC believes that IUE, along with other xUE’s, can help data center owners and operators manage their resources more effectively, enhance their competitiveness, while meeting their social responsibility requirements," it says. 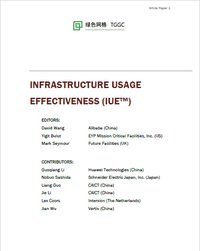 IUE combines power delivery and distribution, cooling generation and cooling flow, and Rack U count (the IT capacity of the facility), extending PUE to include more variables, alongside the output of the data center IT load.

The metric doesn't deliver a single number like PUE that can be compared between facilities, as the data center owner can choose how many of these elements to include. Instead, the purpose is to construct bar charts and spider diagrams which will reveal which elements are limiting performance of a particular facility.

For any given data center, the overall IUE figure is a percentage based on how much of the designed IT load can be used. If the IT equipment can be run at 100 percent capacity without overloading any other aspect of the data center, then IUE is 100 percent.

In the diagram above, cooling flow has hit 100 percent so none of the other elements can be increased. The IT load is stuck at 60 percent, and 40 percent of IT capacity is "stranded" or unusable.

IUE "is in the public domain now and it is up to the industry to judge the usefulness of IUE," Wang told DCD. "As the industry evolves, I am certain there will be other infrastructure resources that can be included in IUE considerations. The hope is that the white paper will stimulate more discussions and we will get another shot at involving more experts from around the world and expand IUE to become more inclusive and more useful."

TGGC is part of CCSA, a Chinese standards body set up by the Chinese Government's IT ministry. It will operate independently without any government control, he said: The arrangement is just because non-profits in China have to be "registered legally under a government umbrella," he explained.

The new metric has absorbed some ideas from another Green Grid initiative, PI (Performance Indicator), which was expressed as a spider chart, and was itself a generalization of the ACE metric proposed by Future Facilities. PI was launched in 2016, but has had little exposure since.

There was also at least one other bid for the Green Grid to go beyond PUE: in 2011, it proposed a Data Center Maturity Model (DCMM) which combined multiple factors in a strip resembling the graphic equalizers of audio systems.

TGGC has high hopes for IUE, but has no defined targets. "It is not important or even relevant how I want IUE to be used," said Wang. "If IUE is widely adopted and trusted by the industry like PUE, then it will end up where it belongs."

Before joining Alibaba, Wang served at Microsoft working on cloud and infrastructure efficiencies.