4Degrés data centers founder back with new company and plan

A new Canadian company is planning to build renewable energy-powered data centers in Quebec that specialise in artificial intelligence and use excess heat to warm greenhouses.

QScale is reportedly planning to build at least three renewable energy-powered data centers dedicated to AI across the French region of Canada.

Construction has started on the first campus located in Lévis, outside Quebec City. Delivery is scheduled for November 2022. The company is planning a second facility in the Ecoparc de Saint-Bruno-de-Montarville, Montreal, and reportedly already has agreements in place with Hydro-Quebec.

QScale was founded by Vincent Thibault, Dany Perron, and Martin Bouchard. Bouchard previously founded software company Copernic as well as 4Degrés data centers, which was sold to Videotron in 2015 before Vantage bought the facilities in 2019. 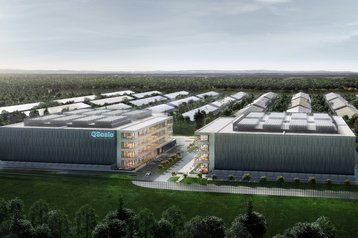 “We must have our food autonomy, but also our calculation autonomy,” Bouchard told LaPresse.ca. “Compared to what you would find in a conventional data center, our fridge-sized server cabinets will have five times the processing capacity.”

The company plans to place greenhouses on its campuses and use the excess heat for agriculture.

“We want to contribute to the food autonomy of the province with a potential of 400 hectares of greenhouses only for the first campus,” said Bouchard. “In Lévis, we have adjacent agricultural land which is equivalent to the equivalent of 80 football fields, enough to produce 2,880 tonnes of raspberries and 83,200 tonnes of tomatoes.”

In the summer months Thibault said the waste heat would be used to dry grain and revitalize surrounding agricultural land.