Principality gets a digital twin hosted in the Grand Duchy

Monaco has opened a virtual ‘e-embassy’ in a data center in Luxembourg.

Announced in July at a meeting between country officials, the digital embassy offers the same ‘guarantees of inviolability and immunity’ as those granted to a physical embassy. The facility will hold a digital twin of Monaco’s government data and online services, including its new sovereign ‘Monaco Cloud.’

The Principality said the arrangement was a way to safeguard important information in the event of a natural disaster or cyber-attack. The small size of Monaco meant a backup facility couldn’t be located in the city and still be geographically distant enough to provide the required redundancy in a large-scale event. 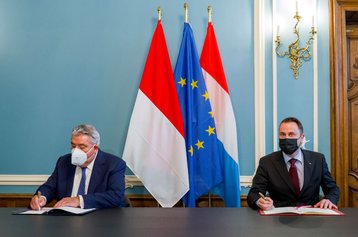 “This Agreement is the first step towards a strengthened partnership in the digital field between the Principality of Monaco and Luxembourg. I am delighted with the arrangement proposed by our Luxembourg partner, under which the Principality will benefit from a solution for safeguarding this data, while preventing any major risks,” said H.E. the Minister of State, Pierre Dartout.

“This e-Embassy was designed and created in Luxembourg, but with our security standards, so as to ensure the sovereignty of our national digital data,” added Frédéric Genta, Country Chief Digital officer for Monaco.

Last year Monaco announced plans to set up its own ‘sovereign cloud’ known as Monaco Cloud. Monaco Cloud is a private law company with the Prince's Government of the Principality of Monaco as the majority shareholder. It selected Amazon Web Services as cloud service supplier, but said data will still be stored in the Principality. The Grand Duchy of Luxembourg will host Monaco Cloud’s digital twin.

Monaco’s agreement is based on a similar one Estonia previously signed with the Duchy. In the wake of state-sponsored cyberattacks in 2007 – the attackers are thought to be Russian-affiliated – Estonia began considering it options to ensure greater national digital resilience. Discussions with Luxembourg began in 2015, before signing an agreement in 2017. Since 2018, an extension of the Estonian Government's cloud has been hosted at LuxConnect's Tier IV data center in Bissen. Estonia utilizes Microsoft Azure for its virtual embassy solution.

“One of the most important tasks of any country is to ensure continuity both on a state level as well as in terms of public services. The Estonian digital and information society is already so highly sophisticated that it is no longer possible to move back to a paper era. Therefore, we have to do our utmost to ensure cyber security, including maintaining the digital continuity,” Siim Sikkut, the Estonian Government’s ICT policy adviser, said at the time. “We have back-up data storage facilities in Estonia, but in order to be prepared for any occasion, if, for example, the state suffers a large-scale cyber-attack, natural disaster or a conventional attack on a data center – we need back-up sites outside our borders,” he added.

Delano.lu reports Monaco’s e-embassy is also in the Bissen facility.