New UPS provides efficiencies to loads as low as 20 percent

Mitsubishi Electric has just launched the AEGIS series UPS as the successor to its 9900A Series. The AEGIS is a three-phase, on-line double-conversion system and features insulated gate bipolar transistor (IGBT) technology.

The AEGIS boasts a fairly flat efficiency curve, claims Mitsubishi, indicating that the UPS is efficient regardless of its load. “This is significant since loads in various data centers can range from 25 percent to nearly 100 percent,” said Dean Datre, general manager of the UPS division at Mitsubishi Electric Power Products.

“The 225 kVA model has an efficiency of 95.7 percent with a load of just 25 percent while in the inverter mode,” he said. The optional Enviro-Mode offers users the ability to achieve even greater efficiency.

The AEGIS has a small footprint, with the largest unit having a width of less than 3 feet and is apparently significantly lighter than competing products.

There are numerous connection options with the AEGIS, which offers cable entry from the top, bottom, and both sides. 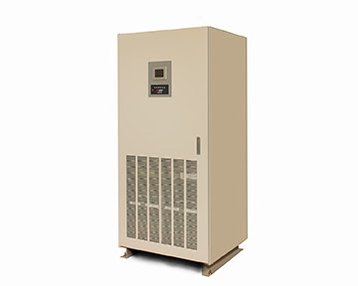 The UPS can be configured as either a single module or a multi-module system with up to four units.

“The high efficiencies afforded by the AEGIS UPS will benefit our customers running mission-critical applications regardless of the load levels. The lower weight and smaller footprint should make it even more attractive to our customers,” stated Datre.