Microsoft 365 and Teams, Dynamics, SharePoint Online, OneDrive and Xbox Live among those affected

Between 19:43 and 22:35 UTC, Azure and other Microsoft services like M365, Dynamics, DevOps, and Xbox Live suffered connectivity issues. 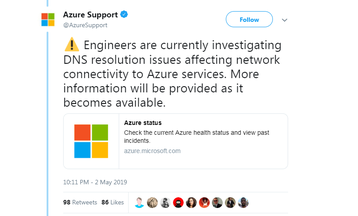 The company added: "To mitigate, engineers corrected the nameserver delegation issue. Applications and services that accessed the incorrectly configured domains may have cached the incorrect information, leading to a longer restoration time until their cached information expired."

The 'Service Health' page of Office 365 was also caught up in the outage, and was unable to detail the issue to 365 users.

Azure suffered a similar DNS-based outage as recently as this January, that time due to "a DNS issue with CenturyLink as an internal DNS provider."

Both outages pale in comparison to last year's much larger Azure outage, which brought systems down around the world for more than a day after lightning strikes took out the cooling in its San Antonio, Texas data center.