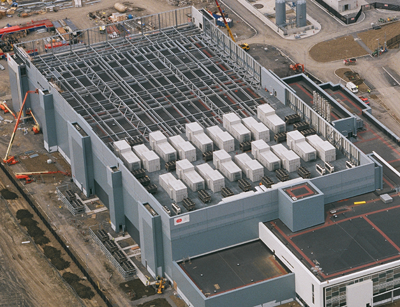 Microsoft is investing an additional US$130 million to expand its Dublin data center.

This expansion will add a 112,000 sq ft Generation 4 facility and will lead to approximately 400 construction jobs over the next 12 months. Once complete, Microsoft will employ approximately 50-70 people to manage the needs of both the existing and expanded facility, according to Christian Belady, GM of data centre services, Microsoft.
He said: “Microsoft has turned up the dial on efficiency in power optimisation of the entire infrastructure of our data centres, enabling us to reduce our carbon footprint and minimise waste.”

DatacenterDynamics toured the Microsoft data center at the time of its opening - full report.

The Irish Prime Minister (Taoiseach), Mr. Enda Kenny said: “We welcome this significant announcement from Microsoft as Ireland continues to regain its international reputation for investment and business. Now central to our Action Plan on Jobs we are delighted that our strategy to become the country of choice for data centres is coming to fruition. We very much recognise the role that cloud computing can play in transforming our public sector as well as being a catalyst for economic growth.”

Recent figures by the Centre for Economics and Business Research show that cloud could contribute €763 billion to the European economy over the next five years.

The expansion is driven by increased demand for Microsoft’s cloud services. This investment builds on the original $500m investment Microsoft made in the Dublin data centre, which has been operational since July 2009, serving customers across Europe, the Middle East and Africa (EMEA).

News of the expansion first emerged two weeks ago.

Peter Klein, Chief Financial Officer, Microsoft Corporation said “This investment shows where we are placing our bets for the future. As customers embrace Microsoft cloud services such as Office 365, Windows Live, Xbox Live, Bing and the Windows Azure platform, we are investing in regional cloud infrastructure to meet their needs.”

“We are seeing increasing numbers of European businesses and consumers adopting Microsoft’s cloud services, and we are continuing to build new infrastructure and services in order to meet current and future demands. From small businesses to large enterprises and governments, we are experiencing increased momentum where organisations are starting to really embrace the full potential of cloud computing to help them transform their business,” says Stephen McGibbon, chief technology officer, Microsoft EMEA.

Microsoft’s commitment to foster the potential of cloud computing for organisations in the public and private sector in Europe extends far beyond the investment in data centres and related services. The company has recently invested €5.3 million in a European Cloud & Interoperability Centre in Brussels, designed to drive innovation and economic growth across Europe.