That’s quite a year we've had – with the Trump administration in the White House and the UK government's incompetent handling of Brexit dominating the headlines in Europe, it seems that the ruling classes have lost their collective minds on both sides of the Atlantic. The political situation has had a wide range of effects on the data center industry - from increased prices on server components in the US to lowered electricity rates in France.

This was the year when cryptocurrencies were decimated (thank God), Huawei sold more smartphones than Apple, Elon Musk got high on camera, and Mark Zuckerberg was forced to testify before the US government. Even Linus Torvalds had to take some time off. 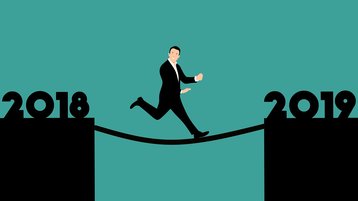 He's scared, I'm scared, you should be scared – Pixabay / mohamed_hassan

At the same time, technological developments progressed at the pace that we've come to expect: we've had skinny mainframes, new types of silicon, and lots and lots and lots of new quantum computers - despite the fact that the practical applications of the technology might be decades away. We could spend the same R&D money on Magnetic Racetrack memory or silicon photonics to get much more immediate results, but I guess storage and networking just don't have the same kind of allure.

Once more unto the breach

Open source is now officially Big Business™, following major acquisitions like Microsoft’s purchase of GitHub and IBM’s purchase of Red Hat. Suse is getting acquired by EQT, a development-focused investment fund, for $2.5 billion, which leaves privately-owned Canonical - essentially the only major Linux vendor to maintain its independence - in an interesting position. Glorious leader Mark Shuttleworth is set on taking his company public, but it's possible that the right offer could change his mind.

This year, we found out more about the inner workings of CERN, investigated public cloud computing in Russia and detailed the story of a supercomputer based on PlayStation 3.

But if I had to identify one trend that defined 2018, it would be edge computing. During the past 12 months, edge transformed from a marketing term into something more tangible - we've already had the equipment and technical capacity, but now we have applications and use cases, and new business models have started to emerge. Most importantly, edge has found its primary location - you will find it underneath mobile base stations and in 'central offices' - former telephone exchanges, of which there are 20,000 in the US alone.

The way I see it, the edge will become the backbone of the Internet of Things, decongesting the core networks. On these pages, we don't talk much about IoT, since it's not a data center subject, but in the world of consumer technology, adding connectivity to a new range of TVs, washing machines or fridges is no longer a luxury but a necessity - if you're not doing it, your competitors will.

In the coming months, we will continue traveling the world, bringing you the hottest data center stories and the most interesting opinions.

Happy new year, and have a great start to your 2019! Let's make it better than the last one.