But a real project is still a ways off

The demonstration project was awarded to the company by the Air Force Research Laboratory as a Phase II SBIR contract through the AFWERX program.

While GPS uses 24 orbiting satellites to provide positioning across Earth, Masten instead proposes using beacons on the lunar surface that will then provide position, navigation, and timing (PNT) information to nearby systems. 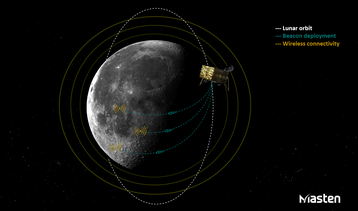 In its Phase I contract, Masten created a concept design for the network prototype that offloads PNT beacons from a spacecraft into a dedicated sensor array on the Moon.

Phase II will see Masten develop those PNT beacons by 2023. Defense contractor Leidos will help build the shock-proof beacon enclosures that can be deployed in lunar orbit to "penetrate the lunar surface and create an autonomous surface-based network," the company said.

The PNT tech will be tested on Masten’s rocket-powered lander, Xodiac, although the lander will remain on Earth.

Separately, it plans to send its XL-1 Lunar Lander to the lunar south pole, with NASA as an anchor customer as part of its Commercial Lunar Payload Services program. The XL-1 will be put into space with a SpaceX launch vehicle, in a mission that was originally scheduled for December 2022, but has since been pushed back to November 2023.

“As one of the first commercial companies sending a lunar lander to the Moon, we’re in a unique position to develop and deploy a shared navigation system that can support other government and commercial missions and enable a thriving lunar ecosystem,” said Masten CEO Sean Mahoney.

“We are literally blazing the trail with this effort, creating the pathway for regular, ongoing, and reliable access to the Moon.”

Future work and government contracts would be needed to turn the lunar GPS project into a reality.

The European Space Agency currently plans a larger telecom and positioning network for the Moon, relying on a constellation of satellites.

Project Moonlight aims to build a telecoms network that can "support any Lunar asset anywhere on the Moon or around the Moon," Phil Brownett, managing director of Surrey Satellite Technology Ltd, said. "Our consortia is focused on building an off-planet service provider," he added.

That's currently separate from NASA's LunaNet project, which hopes to lay the groundwork for both the Moon's Internet and the Solar System Internetwork.

Both projects may require some lunar compute infrastructure, including a data center on the Moon - which is currently being studied by Thales Alenia Space.

All of this work is in the run up to Project Artemis, where NASA hopes to put the first woman and person of color on the Moon by 2024. It then plans to build a long term Moonbase by the end of the decade.

Connecting the Solar System will require delay-tolerant networking. In the latest issue of DCD>Magazine, we spoke to Vint Cerf and Leonard Kleinrock about the bundle protocol, and what it could mean for the future of space communications. Read it for free today