LG's mega data center to open in Korea in July

The facility in Pyeongchon is one of Asia’s largest, and designed for high density servers

A telecommunnictions subsidiary of LG Corporation is set to open what it calls Asia’s largest data center, near Seoul.

LG Uplus (formerly LG Telecom) is Korea’s third largest network operator. Once both phases have been delivered, its new facility in Pyeongchon, Gyeonggi will offer 27,770 square meters of white space, designed to consume a total of 165 Mwatt of power.

The ‘Mega Center’ will offer colocation, managed hosting and cloud services, as well as dedicated facilities for high-density servers. 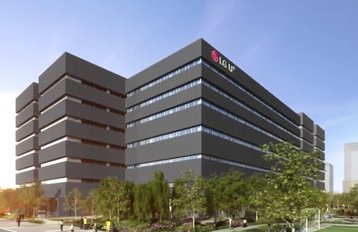 If this does take the crown of the largest data center in Korea, it seems that LG is competing with itself. In 2013, a different LG subsidiary, CNS, which delivers IT services, opened a five-story data center with 15,533 sqaure meters (167,195 sq ft) of raised floor space which LG said was the largest in the country at the time.

Each of the Uplus data center buldings will eventually host 12 ‘modules’ with 450 racks each. These modules have been designed for high density equipment, with an average provision of 10kW per rack throughout the facility.

A 154 kV substation, generators, power distribution panels, UPS and batteries are located on three basement levels. Cooling vents have been integrated into the design of the server rooms, so they are expected to rely on free-cooling for seven months every year, with mechanical cooling only engaged in the summer. 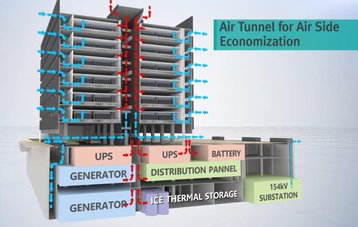 The ‘Mega Center’ has been certified by the Uptime Institute as Tier III - making LG Uplus the first to receive this badge among Korean network providers. The facility is expected to produce annualized PUE of 1.4.

Choi Young-bum, general manager of the Pyeongchon New Internet Data Center Task Force division told JoongAng Daily that special care has been given to the facility’s fire safety, following a recent fire at a data centre owned by Samsung in the same province.

He added that the first tennants have already pre-leased parts of the facility, which will officially open in July.

For more information, check out this video presentation from LG.