And promises to research many other sustainability options

The new heating plant at EPFL (École Polytechnique Fédérale de Lausanne) has been in construction since 2014, and was formally opened this week at CISBAT 2021, a conference about energy efficiency in the built environment, held at EPFL. The system uses water from Lake Geneva, warmed by heat pumps and other sources, and is housed in a building clad with solar panels.

The building's two gas boilers have heated the EPFL campus while the plant was being built, and now serve as backup in case of a failure. 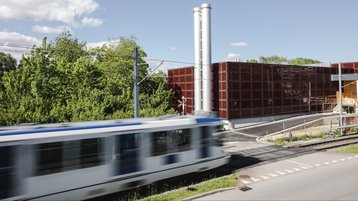 The 1,000 sq m (11,000 sq ft) data center will initially have 12 rows of server racks, one of which is for the use of the neighboring University of Lausanne. All of the racks will use liquid cooling circulated in the cabinet doors. The facility is currently waiting for the racks to be delivered, according to the EPFL announcement; it will start with 2MW of capacity, which is due to be increased to 4MW.

The facility will enable EPFL to consolidate some of its existing 30 data center spaces, but the institution is being cautious about that, said Aristide Boisseau, head of data center operations, in an EPFL statement: "We don’t want to put all our eggs in one basket. We plan to slightly reduce the number of small data centers we have – currently around 30 – and keep the two large ones in the MA and INJ buildings."

The cabinet-door cooling system will give the data center a PUE (power usage effectiveness) of 1.3 - meaning that 1.3 units of electricity are needed to deliver one unit of electricity to the servers - according to EPFL.

Liquid cooling will also make it easy for EPFL to take the data center waste heat and feed it into the heating system alongside other sources.

“The new plant was put to the test one weekend this past February, when the temperature fell below freezing. It passed with flying colors," said Pascal Gebhard, an electrical engineer in the EPFL infrastructure group, in a statement. "Heat pump technology is gaining ground around Lake Geneva. What’s more, thermal waste recovery allows us to close the loop and reuse the water several times. Less water is required, less energy is needed for pumping, and less water is discharged back into the local stream."

EPFL has used lake water since 1985, primarily for cooling, and originally had two oil-fired turbines for heating. When a replacement was needed, gas would have been the cheapest option, but EPFL opted for a mix of renewable energy sources, starting by taking water from deep in the lake, at a temperature of 7°C and warming it with heat pumps to 67°C.

As well as the solar panels, EPFL plans to use a nearby composting facility which handles plant waste from nearby parks and gardens, as well as a digester that handles food waste from the campus cafeterias - both of which could produce small-scale local biogas.

EPFL doesn't see this as a major source of energy, but a good way to reduce emissions from dealing with the waste: "The primary purpose of this facility is to treat food waste locally rather than trucking it off site," said EPFL energy project manager David Gremaud. "In addition, it can be used by the academic community for teaching and research purposes."

The energy savings from the solar panels are also marginal, providing just 160kW, compared to the 2MW output of a single heat pump.

The facility will also allow other experiments in a special raised area along one side the plant, the size of six badminton courts, for the use of researchers such as Jan van Herle from EPFL’s Group of Energy Materials (GEM), who is working on a fuel cell, that could now be tested using local biogas.

Other researchers include Jürg Schiffmann, an associate professor at EPFL’s Laboratory for Applied Mechanical Design, who is working on a new kind of compressor for heat pumps, and Prof. Mario Paolone at EPFL’s Distributed Electrical Systems Laboratory who is developing ways to integrate the heating plant into the smart system used to manage the campus’ electricity use.

Compared with the original oil turbines, EPFL has cut CO2 emissions by 1,800 metric tons a year.

The construction work was delayed due to Covid-19, but also due to quagga mussels from Lake Geneva, which moved in and clogged up the heating system until engineers cleaned the equipment and put in a filter.

"The technology used at our heating plant isn’t necessarily complicated," said François Maréchal, professor at EPFL’s School of Engineering. "What makes our plant innovative is the way the different systems are integrated together. It stood out when it was first built 50 years ago and it still does today, making the EPFL campus a benchmark when it comes to sustainable development."