Plans to talk to major data center developers about the idea

An Irish county is looking into integrating data centers with renewable energy and green hydrogen. 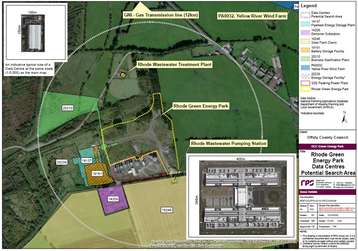 The 'Exploring Data Centre Integration with Renewable Energy and Green Hydrogen in the Midlands' study will "research how best to shape the development of the energy transition project at Rhode (Rhode Green Energy Park) to match the data center sector requirements and ambitions, with a view to attracting significant inward investment and employment creation," tender documents state.

The study will focus on three main areas - technical, market, and conceptual. "The technical strand will focus on energy systems integration challenges for data centers in the Midlands, specifically how a very low carbon operational configuration can be achieved given the prevailing conditions and renewable energy availability," the tender says.

Market research "will involve research in co-operation with existing data center operators and those with plans for expansion in Ireland," while concept development will "research the best model or models that can be applied to develop a successful concept."

A previous study of the Rhode Green Energy Park said that data centers would be an "ideal anchor industry for the park," and could provide waste heat. However, the report also said the data centers could use natural gas, a fossil fuel, as a backup power source.

The studies come at a difficult time for data centers in Ireland, with the rapidly growing sector consuming more and more of the nation's power.

The Commission for Regulation of Utilities has called for new data centers to be built outside of Dublin, while the Irish National Trust has warned that data centers could use 31 percent of Ireland's electricity capacity by 2027 - threatening the grid, and Ireland's climate commitments.

People Before Profit, a green left-wing party, has called for a moratorium on new data center developments.