Internet services in Iran's northwestern Kurdish region were brought offline by the state as it tries to quell mounting protests over the killing of a young woman by the 'morality police.'

The 3.5-hour outage on Monday, 19 September, comes after degraded services in Tehran and other cities since public demonstrations began on Friday. 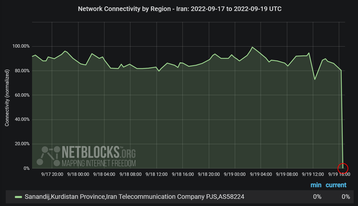 The Kurdish city of Sanandaj was among the regions fully disconnected from the Internet, according to outage tracker NetBlocks.

22-year-old Kurdish woman Mahsa Amini died in hospital on 16 September, three days after she was arrested and beaten by morality police in Tehran. She had been detained for allegedly violating Iran's hijab rules.

Iranian police forces claim that she suffered from a heart attack, but her family say that she had no health problems.

At least five protesters are believed to have been killed as tensions mount. Kurdish civil society organisations have called for a general strike in all of Kurdistan.

On social media, videos are being shared from Amini’s home town of Saqqez of protesters tearing down posters of Iran’s authoritarian leader, Ayatollah Khamenei.

Following the Internet disruptions, SpaceX's Elon Musk said that "Starlink will ask for an exemption to Iranian sanctions," to supply the company's satellite-Internet dishes to citizens in the country.