Brain-inspired tech aims for the Edge

Intel has made its neuromorphic chip available to the broader research community.

The chip itself is known as Loihi, but Intel combines eight to 32 of the chips to form one 'Nahuku board' and then combines several Nahuku boards to form one Pohoiki Beach neuromorphic system containing 64 Loihi chips. 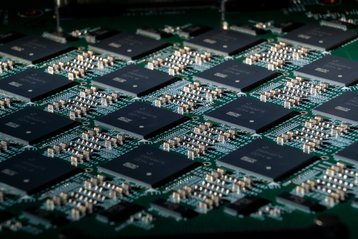 “We’ve implemented a programmable feature set which is faithful to neuromorphic architectural principles. It is all distributed through the mesh in a very fine-grained parallel way which means that we believe it is going to be very efficient for scaling and performance compared to a von Neumann type of an architecture approach," Mike Davies, director of Intel’s Neuromorphic Computing Lab, told DCD last year for our deep dive feature exploring various ambitious neuromorphic computing approaches underway around the world.

“We are impressed with the early results demonstrated as we scale Loihi to create more powerful neuromorphic systems. Pohoiki Beach will now be available to more than 60 ecosystem partners, who will use this specialized system to solve complex, compute-intensive problems," Rich Uhlig, managing director of Intel Labs, said.

The system relies on spiking neural networks, which use the frequency of spikes, or the timing between spikes, to encode information, akin to how neurons in the brain communicate through "pure unit impulses where all the information is conveyed simply in the timing of the spikes and the relative timing of different spikes from different neurons,” University of Manchester's Professor Steve Furber told us last year.

This approach can lead to faster computation on certain workloads, and vastly less power usage than with conventional systems - making it more attractive for Edge devices.

Later this year, Intel promises to introduce a larger Loihi system named Pohoiki Springs, which will build on the Pohoiki Beach architecture. A version of Pohoiki Springs was detailed to DCD in 2018 that comprised of up to 768 chips.

If you are interested in reading about other non-von Neumann architectures, be sure to subscribe to the latest magazine. In our summer edition of the free magazine, we explore in-memory computing using phase-change memory chips for a new take on deep learning workloads.