US Air Force and IBM to build 'brain-inspired' supercomputer

The US Air Force Research Laboratory (AFRL) will collaborate with IBM on a ‘brain-inspired’ high performance computing system powered by a 64-chip array of the IBM TrueNorth Neurosynaptic System - a low energy chip designed to mimic brain activity.

The company claims that the system’s pattern recognition and sensory processing power will be the equivalent of 64 million neurons and 16 billion synapses, while the processor will require just 10 watts of power.

Update: We spoke to Dharmendra Modha, as well as researchers from around the world, in a deep dive feature on neuromorphic computing. Read it today. 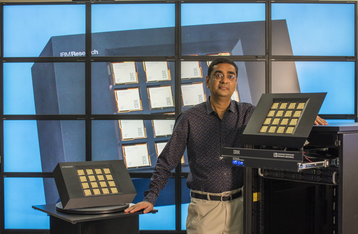 The system fits in a 4U-high (7in) space in standard server racks, with eight of the systems enabling the 512 million neurons per rack.

One processor consists of 5.4 billion transistors organized into 4,096 neural cores forming an array of 1 million digital neurons that communicate with each other via 256 million electrical synapses.

“The new neurosynaptic system will be used to enable new computing capabilities important to AFRL’s mission to explore, prototype and demonstrate high-impact, game-changing technologies that enable the Air Force and the nation to maintain its superior technical advantage.”

Dharmendra S. Modha, IBM Fellow and chief scientist of brain-inspired computing, added: “The evolution of the IBM TrueNorth Neurosynaptic System is a solid proof point in our quest to lead the industry in AI hardware innovation.

“Over the last six years, IBM has expanded the number of neurons per system from 256 to more than 64 million – an 800 percent annual increase over six years.’’

Last year, Lawrence Livermore National Laboratory and IBM collaborated on building one such machine to help the National Nuclear Security Administration (NNSA) in its core missions of cybersecurity and stewardship of the US’ nuclear weapons stockpile and nonproliferation.