Modeling the brain just got a bit easier

The SpiNNaker (Spiking Neural Network Architecture) project, which aims to design a many-core computer architecture for simulating parts of the human brain, has reached one million cores in a single machine.

Built by the Advanced Processor Technologies Research Group (APT) at the School of Computer Science, University of Manchester, the system is part of the European Union's Human Brain Project. 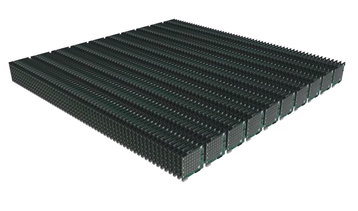 The project, led by the creator of the original ARM architecture, Professor Steve Furber, hopes to simulate the way biological neurons in the brain use 'spikes' to communicate, by mimicking the process in the packets of the SpiNNaker system - with up to 10,000 small packets sent out from a processor at a time. This is used to run spiking neural networks, which use the frequency of spikes, or the timing between spikes, to encode information.

For SpiNNaker, the team developed its own chip of the same name, which features 18 ARM968 processor nodes. In 2023, the group will release the SpiNNaker 2 chip, with 160 Arm Cortex-M4F nodes per package.

"This is a really exciting milestone in the development of the SpiNNaker project, which has been 20 years in conception and more than 10 years in construction, and we have reached the ultimate objective set when the project started of putting together a million cores in a single computer for real time brain modeling applications," Furber said.

"It's a great credit to the team members who worked with me over the years developing the hardware and making sufficiently reliable that a machine at this scale can be expected to perform consistently and also software tools which have absolved a huge development effort to get them to the level where they can configure interesting problems to run on this machine.

"So this is a day I have been waiting for for a very long time and I'm very excited that we reached it."

In the next issue of the DCD Magazine, we talk to Professor Furber about the SpiNNaker project, along with several other leaders in the field of neuromorphic computing - including the head of IBM's TrueNorth project, Dr Dharmendra S. Modha, the Human Brain Project's Professor Karlheinz Meier, Mike Davies, responsible for Intel's Loihi project, and the father of neuromorphic computing, Carver Mead.