Intel has launched its much-delayed Sapphire Rapids Xeon CPUs will be available in 2023.

The new processors, branded Xeon Max, were announced in advance of Supercomputing '22, and will feature 56 of Intel's 12th generation x86 cores, and will feature the newer I/O options DDR5, PCIe 5.0, and Compute Express Link (CXL) 1.1. 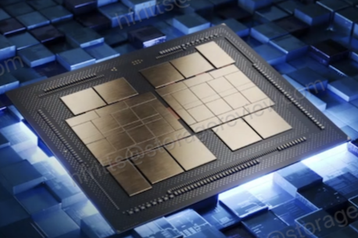 All these features are available in AMD's rival 4th Gen Epyc Genoa x86 processor, which has 96 cores and can be ordered now.

Xeon Max will have 64GB of high bandwidth memory (HBM), with around 1TB/s of memory bandwidth. It will run at 350W and includes accelerators for AI and HPC, which Intel claims can double the deep learning performance of a system compared with AMD's (previous generation) Epyc 7763 CPU.

The company also announced a new GPU Max Series, code-named Ponte Vecchio, already in line for use at the forthcoming (and delayed) two-exaflop Aurora supercomputer at Argonne National Laboratory.

Intel says this is its highest-density processor, with 100 billion transistors in a 47-tile package. Both the CPU and GPU share an "oneAPI" software ecosystem with a single programming environment.