Monster processor has 96 cores at 4.4GHz, along with DDR5, PCIe 5.0, and Compute Express Link

AMD has launched the fourth generation of its Epyc data center processor, with a host of new features that add up to a severe challenge for Intel.

The Epyc "Genoa" chip includes 96 cores and clock speeds as high as 4.4GHz, as well as support for the DDR5, PCIe 5.0, and Compute Express Link (CXL) standards. The processors are already being built into servers from vendors including Dell, HPE, and Lenovo, as well as cloud servers by the likes of Google and Microsoft. 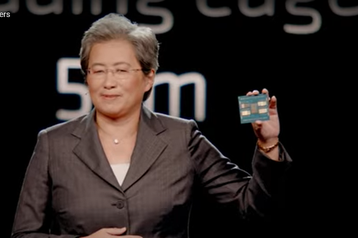 Chip-watching sites are reporting that Genoa offers better performance than Intel's much-delayed "Sapphire Rapids" Xeon chips, which are due to finally arrive in 2023.

"The AMD EPYC 9004 series, codenamed 'Genoa' is nothing short of a game-changer," comments Serve The Home. "The new AMD EPYC Genoa changes the very foundation of what it means to be a server. This is a 50-60 percent (or more) per-socket improvement, meaning we get a 3:2 or 2:1 consolidation just from a generation ago. If you are coming from 3-5 year-old Xeon Scalable (1st and 2nd Gen) servers to Epyc, the consolidation potential is even more immense, more like 4:1. This new series is about much more than just additional cores or a few new features."

The new processors are built with TSMC's 5nm fabrication process and run at up to 4.4GHz. They are also based around the Zen 4, AMD's highest-performance core, which is claimed to offer a 14 percent improvement in instructions per clock over Zen 3.

They are aimed squarely at data centers, and support for the latest I/O standards, DDR5, PCIe 5.0, and Compute Express Link (CXL). standards.

Dell Technologies will use the processors in its next PowerEdge servers, HPE will put them in ProLiant Gen11 servers, and Lenovo has announced 21 new ThinkSystems and ThinkAgile hyper-converged systems based around the Genoa chips. Alongside this, Supermicro showed Genoa servers.

Google Cloud has said it will use Genoa in Google Cloud Compute Engine servers, as well as talking about how existing Epyc chips are in use in its cloud/ Microsoft showed Genoa in Azure virtual machines. Oracle showed Genoa-based Oracle Cloud Infrastructure (OCI) E5 compute instances.

In software, VMware announced vSphere 8 support and optimization for Genoa.

“Choosing the right data center processor is more important than ever, and 4th Gen Epyc processors deliver leadership in every dimension,” said AMD CEO Dr. Lisa Su. “The data center represents the largest growth opportunity and most strategic priority for AMD, and we are committed to making AMD the partner of choice by offering the industry’s broadest portfolio of high-performance and adaptive computing engines.”

The chips are packaged in a larger socket to dissipate heat, and use a "chiplet" design, in which the processor now has 12 dies. The chiplets group the cores, so each has eight cores sharing 32MB of L3 cache. Alongside the full-featured 96-core versions, others are available down to 16 cores.

The trade-off is a hotter chip. Each core uses more or less the same power, but because there are more of them on board, so the Genoa chip could be running at 400W if customers take to the higher clock speeds. This compares with maybe 700W for GPUs.

They can be ordered now, and parts should start arriving in December.