Inmarsat wins $1 billion contract with the US Navy

Inmarsat has won an almost $1 billion contract with the US Navy for satellite communications services. 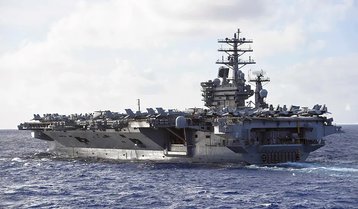 The contract is an indefinite-Delivery, Indefinite Quantity (IDIQ) contract, the ceiling value of the award is $980 million over a 10-year period. The CSSC II program is the follow-on to the CSSC contract where Inmarsat Government was the prime contractor.

Under the contract, Inmarsat will deliver worldwide managed telecommunications services, including satellite capabilities via Inmarsat Global Xpress Ka-band, as well as C-Ku and X-band frequencies, for mobile and fixed satellite services on crewed and uncrewed maritime, airborne, and ground platforms.

Susan Miller, chief executive officer of Inmarsat Government, said: “Inmarsat Government is proud to be selected as the end-to-end SATCOM provider under the US Navy CSSC II contract. Inmarsat Government has delivered proven, reliable, and resilient worldwide capabilities to the US Navy over the past decade, and we look forward to continuing our support to their highly demanding operations at sea, in the air, and on the ground, anywhere in the world.”

SpaceNews reports that the award of CSSC II was expected last year but was delayed due to a protest Inmarsat filed in February 2021 with the Government Accountability Office due to DISA inadvertently releasing Inmarsat’s CSSC I pricing information, giving competitors access to proprietary data.

The deal, another Indefinite-Delivery, Indefinite Quantity (IDIQ) contract with a ceiling value of $578 million over a 10-year period, is again for worldwide end-to-end commercial satellite communications services.