The new service expands its current L-band satellite services to provide a narrowband network suited for IoT-based use cases. 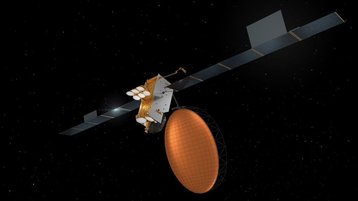 “Elera is perfectly suited to the needs of the connected IoT world,” said Rajeev Suri, CEO, Inmarsat. “Global reach, extraordinary resilience, faster speeds, smaller and lower cost terminals are all part of ensuring that we remain ahead of others in meeting the needs of our customers.”

As well as new low-cost terminals, the company said it will be able to deliver L-band speeds up to 1.7Mbps. Live customer trials in commercial aviation are scheduled to start during the course of 2022.

Inmarsat is launching two new I-6 satellites to enhance the Elera network. The first new satellite is scheduled to launch at the end of 2021. The company said the L-band capacity on each I-6 satellite will deliver 50 percent more capacity per beam compared to Inmarsat’s 4th generation spacecraft.

Inmarsat ordered the two I-6 satellites from Airbus Defence and Space in 2015 in a contract worth around $600 million.

The company said Elera will be a “key component” of its new recently-announced Orchestra network, which combines GEO, LEO, and 5G networks into one offering.

Announced last month, Orchestra will combine Inmarsat’s existing GEO satellites – both GX and L-band – with a new “small constellation” of 150-175 satellites LEO satellites, while terrestrial 5G will add capacity in ‘hot spots’ such as ports, airports, and sea canals.

“Elera is the exciting vision of how Inmarsat is planning to transform the capabilities offered to IoT and mobility customers for years to come and confirms our long-term commitment to L-band services. We will be sharing further detail on these innovations with our partner community in the coming months and continue our program of announcements as we achieve major milestones.” added Suri.