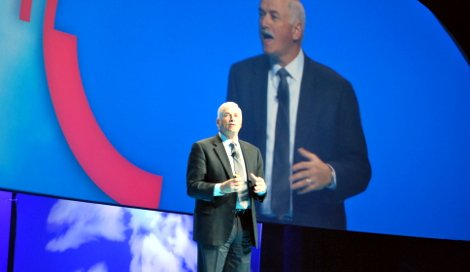 IBM has added a Platform-as-a-Service offering to its service portfolio called BlueMix, taking another big step in its efforts to expand in the cloud services market.

The company announced the news at its Pulse conference in Las Vegas Monday, the same day it announced the acquisition of Cloudant, a NoSQL Database-as-a-Service provider.

IBM is following a trend that has dominated the world of IT infrastructure services over the past few years: making the process of developing and deploying enterprise applications mirror the agile and rapid iterative process used by internet giants like Google and Facebook, who are famous for deploying new features at blazing speeds.

“Gone are the days of long 18-month development cycles,” Robert LeBlanc, senior VP of software and cloud solutions at IBM, said. “We can't be thinking 18 months. We gotta be thinking 18 weeks.”

Pivotal, an EMC- and VMware-owned company that has until now overseen the Cloud Foundry project, today announced creation of an independent foundation that will take over management of the open source community. IBM is one of the new organization's founding members, together with HP, SAP, VMware, Pivotal, EMC and Rackspace.

In addition to the ability to run in any type of infrastructure cloud, IBM's new PaaS works for applications written in any language, LeBlanc said during his keynote presentation at Pulse. It also provides DevOps (development operations) services and native mobility features.

“Next generation of applications have to be mobile,” LeBlanc said. The mobile services include data APIs (application programming interfaces), application management and quality assurance.

There are also big data analytics features, ranging from in-memory data store to Hadoop analytics. The DevOps services include an integrated developer experience for mobile and cloud applications.

The service, called JSON, provides what the company says is a simpler-than-usual API for mobile data to mobile and web developers. Using it as a service, developers will supposedly no longer have to worry about database management, outsourcing it to the cloud.

In addition to all the developer features, however, Cloudant has fortified its service with enterprise-grade reliability features. “They have built in replication and sync for disaster recovery, high availability, and they enable you to push the data close to the user [for mobile applications,” LeBlanc said.