IBM has open-sourced parts of its Power computer architecture, in an attempt to recruit help from industry in boosting its performance.

The computer giant said it hoped to improve data flows between processors and connected hardware devices, to resolve the industry-wide crisis of decelerating advances in chip design.

This idea had been fundamental to two of the world's fastest supercomputers - the Summit and Sierra systems it had built for the US Department of Energy (DOE), both of which used its Power architecture - a RISC-like family of computer processors. It sought to encourage industry to find ways of addressing the same problem, by opening the rights to the instruction set and interfaces for the Power architecture. It published the software and hardware reference designs as well, and hoped technological breakthroughs would be implemented in common high-power computing environments such as data centers. 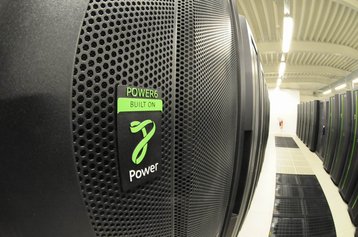 Moore's law - the famous prediction that boundless innovation would double the power of computer processors every two years, and which has held true since the early 1970s - was flagging, said Ken King, general manager of OpenPOWER in a blog post. Yet this had happened just as artificial intelligence, data analytics and cloud computing were making greater demands for data comms between cpus and other system hardware.

A significant aspect of its DOE computers had been faster data flows between CPUs and attached devices, using its Open Memory Interface (OMI) and Open Coherent Accelerator Processor Interface (OpenCAPI).

Giving industry free rights to use these interfaces and its processor instruction set would be "critical to overcoming performance bottlenecks for emerging workloads like AI," it said. It would help "maximize memory bandwidth between processors and attached devices". In an announcement made at the Linux Foundation Open Source Summit in San Diego, IBM also gave the Linux Foundation control over the OpenPower Foundation, the umbrella body which manages the Power architecture.

Combined with IBM's $34bn buyout of open source system software house Red Hat last year, its open move made Power the "only architecture that can boast of a completely open system stack, from the foundation of the hardware through the software stack," King said in the press statement. The underlying Power system would still be IBM's commercial property.

There was meanwhile a trend for manufacturers to develop open hardware. By making its interfaces and instruction set open, IBM said it was making its implementation rights free of license costs.

Companies who lined up to support the move included Xilinx Data Center Group and public cloud provider Nimbix, which uses the Power architecture.

IBM had given management of the open technologies to the Linux Foundation, a group that manages open source software projects.

Jim Zemlin, executive director of The Linux Foundation, said in a press release that it would stimulate innovation by giving developers more access Power tools and technologies.

The RISC (reduced instruction set computing) technology upon which IBM built its Power CPU was shared also by RISC-V, an instruction set that was open sourced by academics at the University of California. Chinese internet giant Alibaba incorporated their technology in a commercial AI chip.

A softcore implementation of the POWER ISA would allow developers to amend the instruction set and create their own variants. IBM first open sourced part of Power in 2013, by making its releasing its interface protocols as open standards. The latest move involves it publishing reference designs to its OMI and OpenCAPI interfaces, it said. The OpenPower Foundation of companies who used the technology, whose membership numbers 350, was given over to the Linux Foundation as well.

The latest version of Power, Power9, is used in both the Oak Ridge National Laboratory's Summit system (a stepping stone to exascale computer systems) and the Lawrence Livermore Laboratory's Sierra. Both systems use Nvidia GPUs and Mellanox networking chips as well.