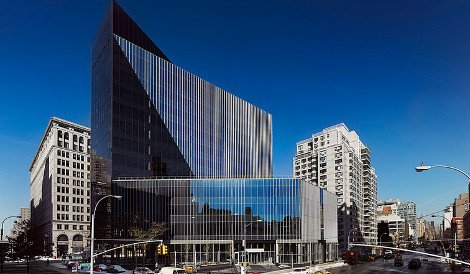 The following content is from an older version of this website, and may not display correctly.
IBM announced three cloud-based services that will deliver to customers capabilities of Watson, its computing technology that became famous when it won the TV quiz show Jeopardy in 2011, this week.
The company also established an office in New York City dedicated to monetizing Watson and stimulating an ecosystem of startups whose products use the technology. The Watson Group has a US$1bn investment commitment from the parent company, $100m of which has been set aside for venture investment in companies it hopes will make up that ecosystem.
Not only is Watson now capable of things beyond trivia games, it is now a lot smaller than it was three years ago on Jeopardy. IBM claims it has shrunk it “from the size of a master bedroom to three stacked pizza boxes.”
Watson the Jeopardy champion was a cluster of 90 IBM Power 750 servers, powered by IBM's Power 7 processors, Tom Rosamilia, general manager for Power and zSystems at IBM, told us back in 2011. He also said the system was deliberately designed on commercially available servers to accelerate the technology's adoption by the market.
The system combines advanced natural speech recognition technology with unstructured data analytics. The three services IBM announced this week use the speech-based user interface for business and research data analytics.
Michael Rhodin, senior VP of the new Watson Group, said Watson could be “the ultimate advisor” delivered from the cloud. “These new cognitive computing innovations are designed to augment users’ knowledge, be it the researcher exploring genetic data to create new therapies or a business executive who needs evidence-based insights to make a crucial decision.”
The company said it plans to serve the offerings from the cloud infrastructure of Softlayer, a US-based provider it bought last year for US$2bn.
One of the services, Watson Discovery Advisor, is essentially a powerful search tool. Initially geared toward pharmaceuticals and publishers, it can quickly search through a massive amount of articles, journals and studies to identify connections among data from various sources.
Another new tool is Watson Analytics, which creates visualizations of data based on spoken user requests. IBM claims the service will give users value of big data without advanced analytics training.
The third cloud service is Watson Explorer, which delivers a user's entire pool of information in a unified way and enables collaboration.
In November IBM announced a cloud-based development platform developers can use to build applications that integrate Watson capabilities.
Watson got its name from IBM founder Thomas Watson.