IBM plans to build a research hub for next generation AI hardware, with support from New York State and SUNY Polytechnic Institute.

The IBM Research AI Hardware Center aims to achieve a 1,000 times performance efficiency improvement for artificial intelligence workloads over the course of a decade.

The center will host R&D, emulation, prototyping, testing and simulation activities for the new AI cores, while specialized wafer processing will be done in Albany and at IBM’s Thomas J. Watson Research Center in Yorktown Heights. 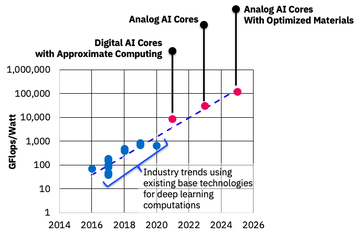 "AI will transform the world in dramatic ways in the coming years," Mukesh Khare, VP of semiconductor and AI hardware at IBM Research, said.

"IBM is pushing the boundaries of AI faster - for the benefit of industry and society. By expanding our partnership with New York State, we are creating a global hub of AI hardware research with an ecosystem to innovate, incubate, and lead in the development of disruptive technologies."

IBM said that it would invest $2 billion in SUNY Poly and its other facilities in New York State, and will provide at least $30 million in cash and in-kind contributions for AI research across the SUNY system, with SUNY matching up to $25 million.

State economic development organization Empire State Development will also provide a $300 million capital grant over five years, to the Research Foundation for SUNY to purchase, own and install tools necessary to support the AI Hardware Center.

"New York has always been at the forefront of emerging industries, and this private sector investment to create a hub for artificial intelligence research will attract world-class minds and drive economic growth in the region," Governor Andrew Cuomo said in a statement.

"Artificial intelligence has the potential to transform how we live and how businesses operate, and this partnership with IBM will help ensure New York continues to be on the cutting edge developing innovative technologies."

Analog AI aims to eliminate the von Neumann memory bottleneck, reducing the need to transfer data between the memory and processor in a system. IBM Research information makes reference to the 'Fusion chip,' which the company says "exploits the storage capability and physical attributes of phase-change memory (PCM) devices to implement an artificial neural network."

Phase change memory has been in development since the 1970s, with IBM announcing it had successfully created and tested PCM back in 2016.

"With PCM, when an electrical pulse is applied to the material, it changes the conductance of the device by switching the material between amorphous and crystalline phases," IBM explains. "A low electrical pulse will make the PCM device more crystalline (less resistance). A high electrical pulse will make the device more amorphous (more resistance). Therefore, instead of recording a 0 or 1 like in the digital world, it records the states as a continuum of values between the two–the analog world."

The material adds: "In deep learning inference, data propagation through multiple layers of a neural network involves a sequence of matrix multiplications, as each layer can be represented as a matrix of synaptic weights... The Fusion chip is a test prototype with which only a single PCM device can be accessed at a time. Future chips will allow to perform the matrix multiplications all in parallel in a single time step, thereby greatly improving the speed and energy efficiency."

DCD has reported extensively on IBM's various chip efforts, including its ill-fated Cell Broadband Engine, its digital AI TrueNorth neuromorphic chip, and its Power architecture that is used in the world's most powerful supercomputer.