Greenpeace says carbon offsets are "greenwash" and should end

There's no time for offsets in an emergency

Carbon offsets are ineffective "greenwash" allowing large companies to carry on polluting unimpeded, according to Greenpeace. 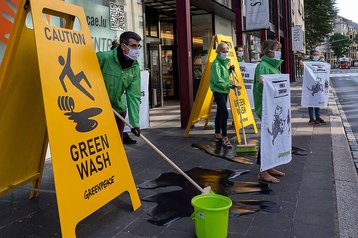 There's no time for this

"There's no time for offsets," Morgan told the Impact event. "We are in a climate emergency and we need phasing out of fossil fuels."

The market for carbon offsets is growing, and is predicted to be worth $50 billion by 2030. However, it has produced some bizarre effects including Oxy Low Carbon Ventures, an Occidental Petroleum subsidiary, shipping so-called zero-carbon crude oil. barrels of regular crude oil, sold at a premium price to include offsets.

Offsets are notoriously difficult to police, with CarbonPlan finding in April that 29 percent of the offsets included in a $2 billion California carbon offset were overestimated.

The offsets also suffer from obvious problems, including that fact that trees take 20 years to grow - so they don't make a good balance for emissions which are happening right now. They are also increasingly vulnerable to wildfires, which could wipe out the benefits overnight.

Despite qualms over offsetting, it's expected that there will be an element of offsetting in any plans that emerge from the COP26 climate conference in Glasgow in November. The summit is expected to hear that massive investment is needed to fund real mitigation efforts to remove carbon from the atmosphere, such as carbon capture and storage which are currently very expensive and generally operate on a small scale.

The recent Intergovernmental Panel on Climate Change (IPCC) report on the physical science of climate change underlined that fossil fuel use must come to an end. “This report must sound a death knell for coal and fossil fuels, before they destroy our planet,” said UN Secretary-General António Guterres. With the planet already warmed by 1.2°C, the only way to head off an increase to 1.5°C, he said, is to put the brakes on.

“There must be no new coal plants built after 2021 [and existing coal power plants must be phased out]. Countries should also end all new fossil fuel exploration and production, and shift fossil-fuel subsidies into renewable energy.