A $1bn solar farm project is to be built directly south of an Indian reservation and will help feed Google’s data center near Las Vegas.

The project will supply NV Energy, the state's largest public utility, which in turn will power Google’s upcoming $600m data center in Henderson, Nevada. The farm is expected to generate up to 690MW of electricity when it is completed in 2023. Also on site will be 380MW of lithium-ion storage. 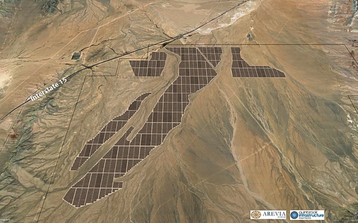 Federal organization The Bureau of Land Management (BLM) - which manages millions of acres for 12 American states including Nevada - published a Notice of Availability in late December on the Federal Register for the proposed Gemini solar project.

The deal was disclosed in a filing with the Public Utilities Commission of Nevada by Nevada Power, a unit of NV Energy, itself a subsidiary of Berkshire Hathaway Energy. DCD can also reveal that Prudential, as shown in an investment update report, is one of the backers of the project.

The planned facility will consist of roughly 7,100 acres (28 million sq m) of public land. The site is about 33 miles northeast of Las Vegas and directly south of the Moapa River Indian Reservation.

Children of the sun

The Gemini project will be built alongside two other projects in the same region. The Southern Bighorn Solar and Storage Center will be built on the Moapa Reservation and is a 300MW solar farm that includes a 135MW, four-hour lithium-ion battery energy storage system. The development firm, 8minute Solar Energy is tasked to build it in 2023.

Arrow Canyon Solar Project is the other 200MW solar project with a 75MW, five-hour battery storage system. The project is also on the Moapa Indian Reservation and is being developed by EDF Renewables.

Over the past 12 months, the Nevada PUC has approved multiple PPAs for NV Energy totaling up to 2,190MW of solar power and around 690MW of battery storage. According to the BLM, the solar projects involving NV Energy amount to more than $5bn of investment into Nevada's economy.

The Notice of Availability opens a 30-day protest period surrounding Gemini and will end on January 27.