The search and cloud giant announced its Equiano privately-funded submarine cable between Africa and Europe in 2019. The cable – featuring 12 fiber pairs and a design capacity of 150Tbps – will link Portugal to South Africa, with branches planned in Nigeria, St. Helena, DR Congo, and Namibia. 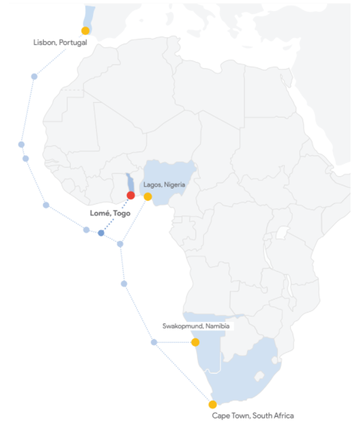 This week Société d’Infrastructures Numériques (SIN), Csquared, and Google announced the cable had landed in the Togolese capital. It is the third cable to land in the west African country.

As part of the announcement SIN, a public telecommunications asset company, has partnered with CSquared, an open access wholesale broadband infrastructure company, to create a joint venture, known as CSquared Woezon.

The new JV, 56 percent owned by CSquared, will be in charge of maintaining and operating the Equiano submarine cable as well as the existing e-Government and Communauté Electrique du Bénin (CEB) terrestrial optic fiber networks located in Togo.

Madam Cina Lawson, Minister of Digital Economy and Digital Transformation for Togo, said: “As Togo continues to earn its place on the regional and international stage as a digital hub and a favorable ecosystem for innovation and investment, our collaboration with Google and CSquared in successfully landing Equiano further demonstrates Togo’s commitment to enhancing public and social services for all citizens so that they can benefit economically.”

Attia Byll, Managing Director of SIN, added: “We are thrilled by the opportunities that this partnership with CSquared and Google will bring to the people of Togo and the country as a whole.”

Equiano cable system is the third private international cable owned by Google and the 14th subsea cable invested by Google. Hyperscalers including Meta, Microsoft, and Amazon are increasingly investing in subsea cables, but Google is leading the charge.

“The landing of Equiano affirms Google’s commitment to the African continent, to support Africa’s digital transformation. We are thrilled that Togo will be Equiano’s first landing on the African continent, as it aligns with the country’s continuing efforts to promote digital inclusion for Africa,” said Nitin Gajria, Managing Director of Google Sub-Saharan Africa. “We look forward to working closely with the Togolese Government and The Ministry of Digital Economy and Transformation as they continue to build their digital infrastructure.”

Lanre Kolade, CSquared Group CEO said: “CSquared is honored to be part of Togo’s Digital Strategy, a strategy focused on social inclusion and economic development that will transform the economy with accessible, safe, and affordable broadband, across gender, and geography. Beyond the landing of Google’s Equiano in Togo, the JV will also manage and rollout Fiber Metros and National Backbone across the country, moving Togo forward on its quest to become a digital hub in West Africa with connectivity into neighboring countries, Ghana, Benin, and Burkina Faso.”

Equiano will be the first cable to land at St. Helena. The SAEx cable from South Africa to Brazil and the US was meant to land on the island, but its current status remains unclear after several years in development. It will be only the second cable to land in Namibia, and third in DR Congo. Other countries could join the cable in future.