Initially connecting to South Africa, then Nigeria, with other West African landfalls planned

Google has announced a new private submarine cable between Africa and Europe. Equiano will initially link Portugal to South Africa, with branches planned in Nigeria and potentially other African countries.

Due to be in operation by 2021 and laid by Alcatel Submarine Networks, this is Google's third private cable, following Dunant between Europe and the US, and Curie between the US and Chile. All told, Google now has 14 investments in international cables including joint ventures. 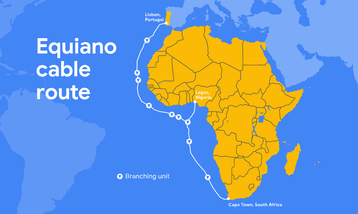 The cable has nine branching points, strategically located by West African countries, but at present the only one with a projected landing is to Lagos, Nigeria - to be added after the link to South Africa goes live in 2021.

The cable is being equipped with space-division multiplexing (SDM), a new technology in submarine cables, which is being added to the transatlantic Dunant cable, and is explained in a Google blog. Submarine cables need to have repeaters - lasers positioned along the length of the cable to make sure signals get to the far end - which have to be powered from the shore. Currently, these repeaters need to be dedicated to a single fiber pair, but SDM allows them to be shared amongst fibers, which makes the cable more diverse, and allows improved optical switching.

"Equiano will be the first subsea cable to incorporate optical switching at the fiber-pair level, rather than the traditional approach of wavelength-level switching," says today's Google blog announcing the cable, claiming Equiano will have 20 times more capacity than the last cable built in this region.

The new cable is named after Olaudah Equiano, a Nigerian-born writer and abolitionist who was enslaved as a boy, and earned his freedom. His book The Interesting Narrative of the Life of Olaudah Equiano (1789) was enormously influential for the anti-slavery movement, and one of the earliest books by an African author to be widely read in the west.

Google's other cables are named after Marie Curie the Nobel Prize winning scientist, and Henry Dunant, the Swiss businessman who founded the Red Cross, won the first Nobel Peace Prize and inspired the Geneva Convention.

Facebook is reportedly in talks to build a Europe-to-Africa cable, called Simba.