As part of the company's $47 billion infrastructure spend 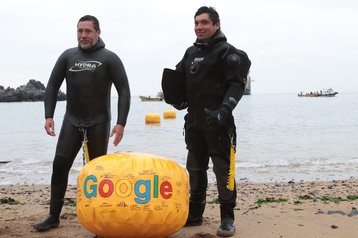 "Although this cable is one of the thirteen financed by Google and installed in the world, Curie makes us the first tech company that, without being a specialist in telecommunications, invests in the development of infrastructure of this 100 percent private type," Jayne Stowell, strategic negotiator for Google's global infrastructure, said.

"[TE] SubCom, a company specialized in submarine data transport, was in charge of the operation to connect two points more than 10,000km away."

Stowell also revealed that Google's global infrastructure investment between 2016 and 2018 was $47 billion - up from previous Google comments placing the figure at $30bn.

Chilean Minister of Transport and Telecommunications Gloria Hutt added that the new cable would “provide advantages and opportunities for millions of Internet users” in Chile.

Chile’s largest single data pipe, Curie will link to Google's data center in Quilicura, near Santiago - which is currently being expanded.

The country has aggressive plans to improve its connection to the wider Internet. Last year, it awarded Huawei Marine with a contract to build a 2,800km (1,740 mile) submarine cable connecting the country’s far south to its north. This will serve as a preliminary step ahead of a proposed 24,000km (14,900 mile), $650 million cable to China.

Chile is also home to 70 percent of global astronomy investment, a fact that has piqued the interest of Amazon Web Services. The tech giant is pitching hosting and mining the huge amounts of data generated by the country’s massive telescopes, building a single virtual observatory stored in the cloud,