Google has tested a scheme that reschedules processing so that tasks which are not urgent can be run when the electricity supply is drawn from renewable sources.

The "carbon-intelligent computing" project takes work such as updating Google Translate's dictionaries, and delays them to times when the local electricity grid is being fed by renewable sources. Not much is revealed in a teasing Google blog post timed for Earth Day this week, but the test uses global data which tells where electricity has come from, provided by Denmark-based Tomorrow. 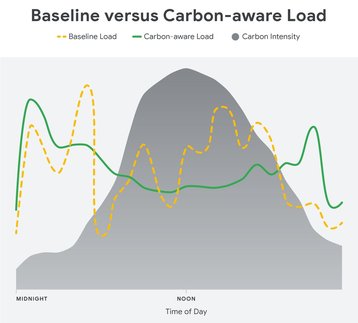 The world needs to shift to renewable sources of energy, to reduce greenhouse gas emissions - but wind and solar energy is very intermittent. Computing could reduce its impact on the planet if it were carried out when these sources are readily available, but most data center services are designed to run continuously.

Google has using a platform designed for its hyperscale data centers, to "shift the timing of many compute tasks to when low-carbon power sources, like wind and solar, are most plentiful," according to Ana Radovanovic, Google's technical lead for carbon-intelligent computing.

While Google responds instantly to user requests on services like Search, Maps, and YouTube, some other jobs can be carried out in the background, such as creating new filter features on Google Photos, YouTube video processing, or adding new words to Google Translate, said Radovanovic. "Shifting the timing of non-urgent compute tasks... helps reduce the electrical grid’s carbon footprint, getting us closer to 24x7 carbon-free energy."

The carbon-intelligent platform compares the expected needs of the Google data center, with a live dataset from Tomorrow called electricityMap, which predicts the average hourly carbon intensity of the local electrical grid over time. "We use the two forecasts to optimize hour-by-hour guidelines to align compute tasks with times of low-carbon electricity supply," said Radovanovic.

The blog post says the platform is running at "every Google data center," but it's clearly in a test phase: "Early results demonstrate carbon-aware load shifting works. Results from our pilot suggest that by shifting compute jobs we can increase the amount of lower-carbon energy we consume," said Radovanovic.

Electricity is less carbon-intensive in the early morning and late evening when wind energy is plentiful, and human use is lower. The diagram shows that shifting some loads to these times reduces overall demands.

Future versions of the project will move tasks between data centers, so work can be done where the energy is greenest. "Our plan for the future is to shift load in both time and location to maximize the reduction in grid-level CO2 emissions."

Radovanovic promises Google will produce research papers that explain in more detail just how well this works, and how it will be rolled out.

The electricityMap service shows in real time the carbon intensity of electricity anywhere in the world. It's also "the largest database of past, current, and future data about how green the electricity is, according to Tomorrow. It was developed to allow people to carry out tasks like charging electric vehicles more intelligently, and can reduce the carbon footprint of a given task by up to 25 percent, the company says.

electricityMap is an open source project on GitHub, where contributors can add new sources of information or languages.

“Our partnership with Google couldn’t have been possible without the contributions of our open-source community," said Martin Collignon, COO of Tomorrow. "We send a heartfelt thank you to everyone who has put countless hours into adding more and more countries on the map and make electricityMap a vital tool helping governments, organizations, and individuals become more climate-friendly.”

Tomorrow also has a tool called North, which aims to be a FitBit like service to helping individuals reduce their carbon footprint by tracking it.

The idea of timing loads has also been proposed by Lancium, a Texas start-up which wants to build "rampable" data centers at wind and solar farms, where they can switch on when there is a surplus or green energy. The company is also working on software to be used by conventional data center operators to carry out the kind of job that Google is doing with its carbon-intelligent platform.