Earlier protests made it dump JEDI and Maven military deals

A small band of Google employees has launched a petition demanding it pass up the chance to supply cloud services to the US border agency because the government unit had committed “human rights abuses” while intercepting illegal immigrants from Mexico.

About 600 people from among 100,000 employees signed a petition yesterday insisting that Google stand by “AI Principles” it announced last year after a similar protest over its attempt to win the US government’s “JEDI” military contract. Google ditched attempts to win the business after protesters said it shouldn’t build systems that caused harm to people. Google conceded.

Protesters spoke out after the US Customs and Border Protection (CBP) agency put out a formal request for cloud computing service providers to say how they might run its IT systems.

CBP, along with its sister agencies in the US Department of Homeland Security - the Immigration and Customs Enforcement (ICE) agency and Office of Refugee Resettlement (ORR) - have been accused of abusing and neglecting people they arrested for entering the US from Mexico.

“They are caging and harming asylum seekers, separating children from parents, illegally detaining refugees and US citizens, and perpetrating a system of abuse and malign neglect that has led to the deaths of at least 7 children in detention camps,” said the protesters, blaming all three agencies for atrocities.

“These abuses are illegal under international human rights law, and immoral by any standard,” said the petition.

Any cloud provider that worked for CBP “will be facilitating its human rights abuses," said the petition, published on the website Medium.

"It’s time to stand together again and state clearly that we will not work on any such contract. We demand that Google publicly commit not to support CBP, ICE, or ORR with any infrastructure, funding, or engineering resources, directly or indirectly, until they stop engaging in human rights abuses."

CBP chief John Sanders resigned in June after speaking in despair that, with its officers arresting around 100,000 illegal immigrants every month, they could not cope. Human rights campaigners published a report that said children had been handled violently and sexually assaulted while in its custody. Some had been kept in inhumane conditions.

CBP were not available to comment about the petition or its accusations. Its procurement notice said it wanted cloud providers to deliver both its back-office IT services, as well as those that supported its border security work. 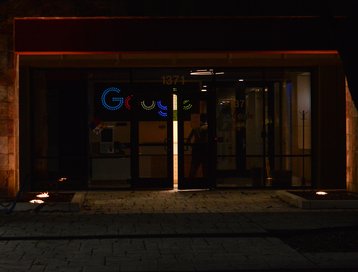 The CBP request for information said that it already used the Google Cloud Platform, as well as those of its competitors, Amazon Web Services, Microsoft Azure, IBM Cloud, and Oracle Cloud. It also used Salesforce and ServiceNow, as well as Quip, Zoom, Office 365, Power BI, IBM Maximo, IBM Trirega, and Presidio.

With at least 24 people having died in ICE's custody since President Trump’s inauguration, including at least seven children in the past nine months, the post's authors argue that "in working with CBP, ICE, or ORR, Google would be trading its integrity for a bit of profit, and joining a shameful lineage.

"We have only to look to IBM’s role working with the Nazis during the Holocaust to understand the role that technology can play in automating mass atrocity."

Thousands of Google employees in 2017 protested Executive Order 13769, a ban on travel to the US from seven Muslim-majority nations.

Google co-founder Sergey Brin was among those marching. "I'm here because I'm a refugee," he told a BuzzFeed reporter.

It is not the first time Google employees have spoken out against it. In March 2018, Gizmodo revealed that the company was working with the Department of Defense on Project Maven, with the cloud contract focusing on image recognition for military drones.

A small deal worth around $9m, Google's Maven work was viewed by the Cloud division's then-CEO Diane Greene as a way to open the door to larger contracts with the DoD. But some at Google expressed concern about whether the company, famous for its ‘Don’t Be Evil’ slogan, should be getting into the business of war.

"Amid growing fears of biased and weaponized AI, Google is already struggling to keep the public’s trust," a petition, signed by some 4,000 Google employees, said. "By entering into this contract, Google will join the ranks of companies like Palantir, Raytheon, and General Dynamics."

Around a dozen Google employees are believed to have resigned over the Maven contract, with one departing engineer petitioning to rename a conference room after Clara Immerwahr, a German chemist who killed herself in 1915 over the use of science in warfare. “Do the Right Thing” stickers appeared in Google’s New York City offices, it was reported.

Google tried to contain the crisis by entering talks with staff including Greene and Meredith Whittaker, at the time a Google AI researcher who was among the most vocal against the Maven deal, as well as Vint Cerf, its VP and Chief Internet Evangelist.

The company then released its "AI Principles," that clarified the company's views on working with the military, and in June 2018 said that it would not renew its Maven contract. Four months later, Google said that it would no longer compete for the Joint Enterprise Defense Infrastructure (JEDI) cloud contract, a single-award deal for the majority of the DoD's cloud computing needs, worth up to $10bn over 10 years.

“We are not bidding on the JEDI contract because first, we couldn’t be assured that it would align with our AI Principles," Google told Bloomberg. But it admitted it had also determined it wasn’t certified to do such government work. 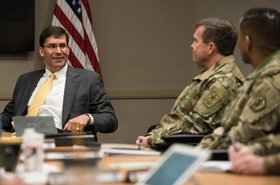 Google has caved in after other protests, including against its plans to relaunch a Chinese search engine, now shelved.

Twenty thousand Google employees protested last after it was reported to have paid Android-founder Andy Rubin $90m to hush up claims of sexual misconduct.

Meredith Whittaker, then head of Google’s Open Research Group, who helped lead the protest, claimed over 300 employees were punished for taking part. "We don’t tolerate retaliation,” Google said in a statement at the time.

Google is not alone in facing the fulmination of its own staff, as consumer-facing companies increasingly seek controversial government contracts.

Employees from Microsoft and Amazon both spoke out against JEDI, with a Microsoft staffer-penned Medium post citing Google protesters as inspiration: "We need to put JEDI in perspective. This is a secretive $10 billion project with the ambition of building “a more lethal” military force overseen by the Trump Administration. The Google workers who protested these collaborations and forced the company to take action saw this."

The letter continued: "A race to the bottom is not an ethical position. Like those who took action at Google, Salesforce, and Amazon, we ask all employees of tech companies to ask how your work will be used, where it will be applied, and act according to your principles."

450 Amazon employees also published an open letter (again on Medium) calling for the company not to sell its Rekognition facial recognition software to law enforcement, and to "kick Palantir, the software firm that powers much of ICE’s deportation and tracking program, off Amazon Web Services."

The letter added: "We follow in the steps of the Googlers who spoke out against the Maven contract and Microsoft employees who are speaking out against the JEDI contract."

Salesforce faced a similar protest, with hundreds of employees urging the company to end three contracts with the Customs and Border Protection agency. It refused to do so, but created an Office of Ethical and Humane Use of Technology to help discuss such issues in the future. "I think every company’s going to need to be able to have a structured conversation around humane use," CEO Marc Benioff told MSNBC.

The Department of Homeland Security has faced numerous protests during Trump's time in office.

Of note was a July 2019 "March on an ICE data center," with protesters in Vermont blocking the Law Enforcement Support Center, on 188 Harvest Lane, Williston, in an effort to shut the facility down.

A nerve center for ICE, LESC provides data about people's immigration status, operates 24/7 and employs approximately 400 workers. While it has some servers it is not, however, a data center.