It owns the land, but has yet to decide if it will use it

Google has acquired a large plot of land in Fredericia, Denmark for a proposed large data center campus.

The 73.2 hectare (7,879,182 sq ft) plot was bought for 65m Danish Krones (US$9.86m) after discussions regarding a data center in the area began more than a year ago, but the search giant has only now made its involvement public.

It bought the land under the guise of Dublin registered Dapsi International, which was founded by MoonVille Limited, which is owned by Google’s parent company Alphabet. 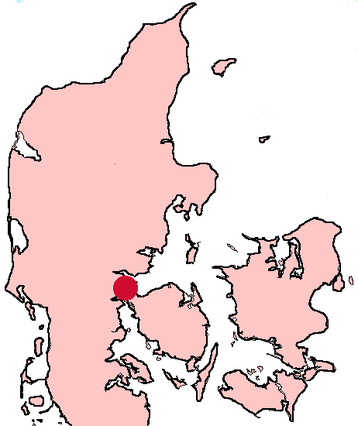 Where Fredericia is in Denmark – Wikimedia Commons/Thuresson

“When selecting an area, we look for a strong and supportive local community with the necessary resources - a workforce, [suitable] infrastructure and renewable energy supply,” Mark Janssen, Nordic communications director at Google, told Fyens Stiftstidende (translated).

Fredericia mayor Jacob Bjerregaard added (translated): ”I am very pleased that Google has bought a large plot in Fredericia. The City Council is working hard to attract investment to the region, and it has succeeded. It is fantastic that one of the world’s biggest brands have decided to invest in Fredericia.”

The region’s commercial director of business, Kristian Bendix Drejer, said that Fredericia council still did not know whether Google will build a data center campus, but that even the announcement of the company’s intent would have a positive impact on bringing interest and investment to the region.

Should the data center go ahead, it will join two other large US tech companies that chose to build facilities in Denmark - Apple and Facebook.

Apple is building a data center in Viborg next to an electric substation so that is will not need backup generators, while Facebook is busy working on an Odense site, officially announced earlier this year.

Google also operates a large data center in Hamina, Finland. Built in an old paper mill, it uses seawater to cool its facilities.