Cable will connect Canada and Japan

Google has announced its new Topaz subsea cable, the first-ever cable to connect Asia and Canada.

The subsea cable, constructed by Google with the help of local partners in Canada and Japan, will run from Vancouver to Port Alberni on the west coast of Vancouver Island, and then across the Pacific Ocean to Mie and Ibaraki in Japan. The cable system is expected to be completed in 2023.

Google intends for the subsea cable to provide low-latency access to Google services including search, Gmail, YouTube, and Google Cloud, as well as increasing capacity in the region for a variety of network operators in Japan and Canada.

The cable itself will house 16 fiber pairs for a total capacity of 240 Terabits per second. It includes support for Wavelength Selective Switch (WSS), an efficient and software-defined way to carve up the spectrum on an optical fiber pair for flexibility in routing and advanced resilience.

Google has stated its intention to exchange fiber pairs with partners who have systems along similar routes, and that other networks and IS providers will be able to use the additional capacity or provide it to third parties.

The cable was approved for development by Innovation, Science and Economic Development Canada in June 2021, with the assessment determining that the cable was unlikely to cause significant adverse environmental effects. 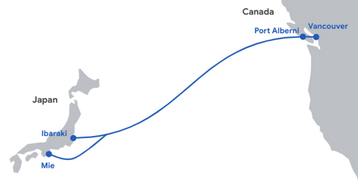 In August 2021, local news reported that Shaw Communications was building a facility to house a new subsea cable in Port Alberni. A cable repair ship, IT Integrity, was also reported to be docked in the area since early July. It has only recently been confirmed that Google was behind the project, despite speculations at the time.

While the cable is the first along its specific route, it is not the first subsea cable connecting Vancouver.

In 1963, the Commonwealth Pacific Cable System was built, connecting Vancouver to Auckland, New Zealand, and Sydney, Australia. It is this cable landing station in Vancouver that has been upgraded to fit the modern fiber optic needs of the Topaz cable.

The Topaz cable will be passing alongside indigenous territories in Canada, including Hupacasath, Maa-nulth, and Tseshaht.

In the announcement of the new subsea cable, Google said: “Traditional and treaty rights, and local communities, are deeply important to our infrastructure projects.” The company said it had consulted with the communities throughout the project.

Chief Charlie Cootes, president of the Maa-nulth treaty society said of its conversations with Google: “The five First Nations of the Maa-nulth Treaty Society are pleased that we have concluded an agreement with Google Canada and have consented to the installation of a new, high-speed fiber optic cable through our traditional territories. This agreement, in which both Google Canada and our Nations benefit, is based on respect for our constitutionally protected treaty and aboriginal rights and enhances the process of reconciliation.

“We would also like to acknowledge the sensitivity that Google Canada expressed during our talks in regard to the pain and trauma experienced by our people as a result of residential school experience.”

The Topaz subsea cable is one of many announced by Google; the company has around 20 subsea cable projects in operation or development, including the Equiano cable recently deployed in Togo.